Relationship with grandmother
When Zack Smith was 14 years old, his grandmother, Judy, was diagnosed with Alzheimer’s disease. As he watched his grandmother decline, he wanted to do something to help. 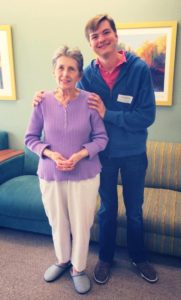 Zack and his grandmother, Judy

A high school service project led Zack to start volunteering with the Alzheimer’s Association when he was 17. “I looked for an Alzheimer’s organization to volunteer with, and that’s how I found the Association,” Zack said.

Initially, Zack met the chief public policy officer for the Northern California and Northern Nevada Chapter. He began helping her with data entry and other office tasks.

Becoming an advocate
Zack learned that Alzheimer’s was the fastest growing disease in the country, and the most underfunded. “It really upset me,” Zack shared. “I wanted to do more.”

Staff gave Zack the opportunity to contact legislators and their staff to educate them on the need for funding for Alzheimer’s disease research and care. He also attended Advocacy Day in Sacramento and the national Advocacy Forum in Washington, D.C.

While Zack was a volunteer with the Alzheimer’s Association, he learned about the entire organization. “It was very empowering,” he said. “There is such a hopelessness about this disease and I found a sense of hope when I became a volunteer.”

Pursuing a degree in public policy
After high school, Zack headed to University of Redlands where he majored in public policy. He specifically wanted to do more for Alzheimer’s advocacy. 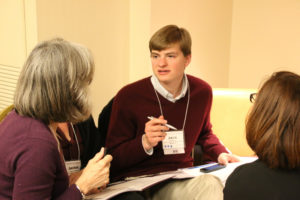 Zack, volunteering as an advocate

While in college, Zack continued to volunteer for the Alzheimer’s Association. He even had the chance to intern with the chapter for three summers.

Interning with the chapter allowed Zack to put his political science coursework into practice. “I think I learned as much in my internships as in my college classes, if not more,” Zack shared. “When my professors would teach components of the legislative process, I’d realize I had already seen it in action.”

Joining the staff
After Zack graduated from college in 2015, he applied for an open position with the chapter. He started as a program specialist and in 2017, became the public policy project manager.

In his current role, Zack helps recruit, train and mentor volunteers. Zack uses his personal experience as an advocacy volunteer in his work. 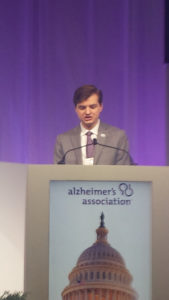 Zack, speaking at the Advocacy Forum

“I know what the challenges are and I can relate to the advocates,” said Zack. “It has been such a privilege, getting others involved and showing them how they can make a difference.”

Teaching others to speak up
Zack teaches people how to talk to their elected officials by sharing best practices for successful visits. “It is important that people let officials know how Alzheimer’s disease has impacted their lives, why it is an issue and why it should get funding,” shared Zack.

Zack believes that many people are intimidated by legislators. “The idea of meeting with elected officials can sound scary,” he said. “It is our role to show people that it really isn’t scary and that everyone has access to speak with their legislators about Alzheimer’s, or any other issue for that matter.”

Zack has found that most people end up feeling empowered. They often look forward to more opportunities to their story with their representatives.

In his experience, Zack has found that the Nevada legislators are sometimes more accessible to constituents because they spend less time at the Capitol and more time in their local communities. However, because of their short legislative season, making progress can sometimes take longer.

Without a way to prevent, treat or cure Alzheimer’s, nearly 14 million Americans will have the disease by 2050. While Zack is one of the youngest people on the chapter staff, he has met many volunteers under the age of 35. 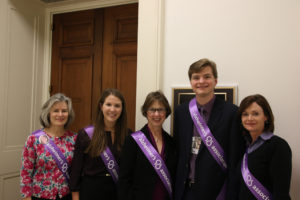 “For many young advocates it is their parents, not their grandparents, who are living with the disease,” Zack explained. “Without an effective treatment, my generation will bear the greatest financial and emotional toll from Alzheimer’s.”

Honoring his grandmother
Zack enjoys being able to go to work every day in honor of his grandmother and in her memory. She continues to be his inspiration. Zack remembers her as a person who always put others before herself without accepting praise.

“My grandmother spent her days trying to improve the lives of others around her. She was very humble and caring,” said Zack. “I try to bring that commitment with me to my work and personal life on a daily basis.”

We appreciate Zack for all that he does to support families in our community who are impacted by Alzheimer’s and other cognitive impairments. Is there a particular individual or job at the Alzheimer’s Association that you want us to feature on the blog? Let us know in the comments.

Thanks to volunteer, Sheri Katz, for her assistance with this post.