To help you meet the amazing Alzheimer’s Association team who are “The Brains Behind Saving Yours®,” we are sharing the stories of our chapter staff on this blog. Today, we’d like to introduce you to Special Events Manager Kim Coelho, our northernmost staff member!

From cancer to Alzheimer’s
Kim has a degree in Journalism and a Masters degree in community health. She had been working for the American Cancer Society for 15 years and really enjoyed the non-profit world. “I saw the huge difference we made with cancer,” said Kim, “with all the funds we raised for research and support services.” 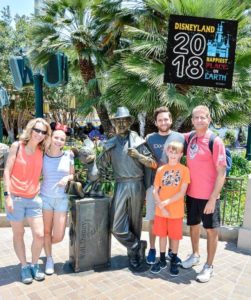 Kim, on left, with family at Disneyland

A former colleague who works for the Alzheimer’s Association reached out to Kim and encouraged her apply for an open position. Kim started in 2017 as the Special Events Manager in Humboldt County.

Solo, but not alone
As a Special Events Manager, Kim primarily coordinates the Humboldt County Walk to End Alzheimer’s, held in October. “The Walk is a year-round commitment,” Kim shared, “which requires lots of follow up and thanking people.”

Kim works mainly with volunteers who support the Walk. She also fields phone calls from caregivers or others who may have questions about Alzheimer’s or other dementias.

Being the northernmost employee in California can be challenging at times. Kim is located in Humboldt County and works out of her house. The closest office to her is in Petaluma, about four hours away.

Fortunately, Kim’s colleagues throughout the chapter provide support. Whether it is creating promotional materials for the Walk, coming to Eureka to speak to caregivers or supporting Humboldt County residents who call our Helpline, Kim appreciates their support.

A community that gives
There are approximately 2,500 people in Humboldt County who are living with Alzheimer’s. Over 7,500 friends and family act as unpaid caregivers.

Inspiration from volunteers
The best part of Kim’s position with the Alzheimer’s Association is working with volunteers. “Volunteers are just amazing,” Kim said. “They truly want to make a difference in this disease.” 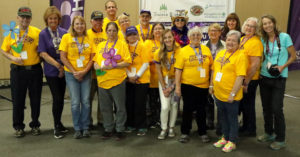 Kim, on right, with the Walk committee

Kim also likes the vision of the Alzheimer’s Association: a world without Alzheimer’s. She attended the last two national leadership summits and was moved as people living with Alzheimer’s and caregivers share their stories.

Always learning
Kim enjoys the professional development she receives from the Alzheimer’s Association, such as quarterly research updates for staff. “The more information that I can get,” said Kim, “the better I can answer questions from the community.”

If Kim could teach one thing to others about this disease, it is that Alzheimer’s is not part of the normal aging process. She looks forward to the day when researchers will find a way to prevent, treat or cure the disease.

A surprise revelation
Since Kim took the position as the Special Events Manager, she has learned that she is closer to Alzheimer’s than she thought. Kim had posted a Walk fundraiser on Facebook, sharing with her friends and family. 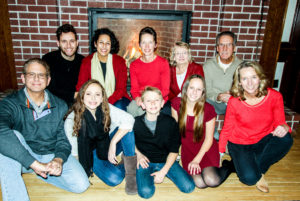 Kim, on right, with her family. Everyone in the photo helped at the Walk.

As a result, she found out that her uncle suffers from Alzheimer’s. Kim’s aunt is his caregiver. Her aunt did not initially want anyone in the family to know, due to fears of the stigma that some face.

“I feel horrible that all these years my aunt didn’t tell anyone,” Kim shared. After speaking up, Kim’s aunt was able to get the support she needed as a caregiver from the Alzheimer’s Association.

Kim says she is inspired by all the caregivers and what they are going through. “I truly believe we will someday find a way to stop Alzheimer’s.”

We appreciate Kim for all that she does to support families in our community who are impacted by Alzheimer’s and other cognitive impairments. Is there a particular individual or job at the Alzheimer’s Association that you want us to feature on the blog? Let us know in the comments.

Thanks to volunteer, Sheri Katz, for her assistance with this post.