My Life As A Caregiver

If you don’t know anyone with Alzheimer’s disease it will not be long before you do. An estimated 5.4 million Americans have Alzheimer’s disease and another 14.9 million people act as unpaid caregivers. It is a cruel disease that takes away independence, robs memories, and steals dignity.

I first encountered Alzheimer’s in 2005 when my dad began exhibiting some of the typical symptoms. He was no longer able to balance the checkbook. He would stare off into space for long periods of time, disconnected from others. The most obvious symptoms presented as well – repeatedly saying the same phrases and asking the same questions.

In August 2006, I traveled to Connecticut to help my mom. At that point, Dad was unable to walk more than the step or two from his bed. I shifted from daughter to caregiver, changing his soiled clothes, helping him to a bedside commode, and bringing him what little food he cared to eat. I remember lying down beside him to hold his hand and share memories until he drifted back to sleep. Afterwards I wept silently as I mourned the loss of my dad. Often you will hear people refer to Alzheimer’s as “The Long Good-bye”. By the time Dad passed away on September 5, 2006 we had been saying good-bye for over a year.

In the summer of 2007, my mother-in-law was diagnosed with Alzheimer’s disease. Immediately she was placed on medication that temporarily slows the worsening of symptoms. She moved into our home so that my husband and I could care for her. We knew she needed social interaction and mental stimulation so we located an adult daycare center near our home. Mom began going to SarahCare in Campbell two half-days a week. She has since increased to six days a week. Daycare for Alzheimer’s patients is a life-saver! It gives me time to take care of household responsibilities without the constant worry that surrounds my daily life as a caregiver.

I have found that caring for a parent with Alzheimer’s is much like caring for a child. At home our schedules continually shift as Mom’s needs change. Though she is able to do most tasks by herself, she requires constant reminders about her daily needs – such as eating, showering and taking medications. Doctor appointments are handled by my sister-in-law. Finances are handled by my husband. Mom thinks she is living independently and is unaware of how much is being done behind the scenes to help her feel this way. Our vocabulary no longer contains the words “spur of the moment” as getting away for even one night requires extensive planning.

Caregiving is a demanding job. It is a 24/7 balancing act – caring for Mom while trying to have our own lives. We are fortunate to have a team of caregivers, but at times it can be overwhelming. Our goal is to keep Mom safe and comfortable at home for as long as possible. How long will that be? It is impossible to know. Until then, we will take it one day at a time. 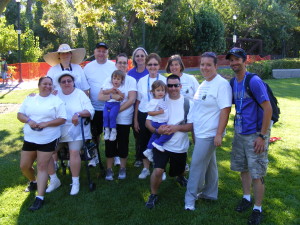 The author with her Walk team in 2010

We have connected ourselves with the Alzheimer’s Association. It offers free programs and services, including a 24 hour Helpline – (800) 272-3900. Last year, I formed a team for Walk to End Alzheimer’s. This year, I have taken my involvement a step further and joined the Walk Planning Committee. The Walk is a great way to meet people dealing with similar issues and make a difference in the fight. You are invited to join my team on October 15 at the Arena Green in San Jose. To learn more, visit: www.alz.org/walk.