Playing Bridge for a Purpose in the North Bay

From Shasta Lake to Fresno and Pacific Grove to Reno, bridge players gather for a higher purpose than just to enjoy a game with friends. On June 21st, they participate in The Longest Day. This annual fundraising event helps the Alzheimer’s Association fuel critical care and support services for the millions of people with Alzheimer’s disease and their caregivers, while advancing research toward the first survivor.

Getting involved in memory of a former club member 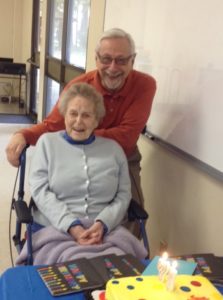 Four years ago, American Contract Bridge League (ACBL) Unit 512 in Sonoma, Napa and Solano Counties decided to participate in The Longest Day in memory of Barbara Fox, a longtime club member and excellent bridge player, who had Alzheimer’s disease. Even when Barbara was no longer able to play due to the progression of her symptoms, she continued to attend the games, sitting by her husband, Gerry, who is still active in the club. Barb Lemme, ACBL Unit 512 president, says that Barbara was “an amazing woman, strong and independent. She was very successful and accomplished a great deal, in spite of adversity. Barbara achieved the honor bridge rank of gold life master.” Barb had an additional reason to participate in The Longest Day: her father, Al Katella, had died from Alzheimer’s.

The more the merrier 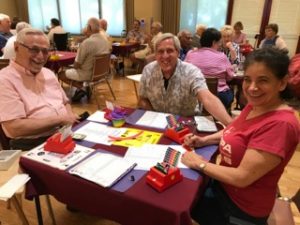 Several club members help plan and lead the various fundraising activities. On The Longest Day, Barb and co-chair Sigrid Price’s team hosts a luncheon and has a special bridge game. They ask people to pay a bit more than the normal fee. This helps raise additional funds. She says that it “feels like a celebration. There are prizes throughout the event. We all have a wonderful time and we feel good for supporting the Alzheimer’s Association,” in memory of Barbara Fox and others they know who have been affected by Alzheimer’s or other dementias.

Besides hosting the special bridge game on The Longest Day, ACBL Unit 512 has held yard sales, silent auctions and luncheons, to name a few activities. Team members bid to play with some of the team’s best players. Members used their own talents to plan fundraisers and also reached out to local businesses to secure silent auction prizes. Barb jokes, “if you are at our event and you stand around too long, you might become a prize.”

Active participation from ACBL teams in our area

Locally, the Alzheimer’s Association has had active participation from ACBL clubs throughout our Chapter. In 2017, 18 local ACBL teams participated, raising over $37,000 for programs and research. Barb, who also serves on our chapter’s planning committee for The Longest Day, notes that “participating club members are very generous. It’s an amazing event to bring the groups together.” Each year, more clubs and members get involved and expand their activities.

Tips for team success
Barb has a lot of great tips for ACBL clubs and other groups who are participating in The Longest Day:

Why did bridge teams get involved in The Longest Day?
Staying mentally and socially active are two strategies to improve brain health. Given the importance of brain health for a good bridge game, it’s no surprise that the American Contract Bridge League was the first organization to join the Global Team program for The Longest Day in 2012. Every year since, ACBL has activated its network of bridge players across the country to take a stand, raising more than $3.5M over 5 years, including $1M in 2017.

ACBL’s contributions to The Longest Day 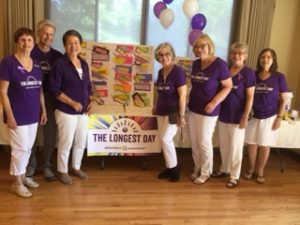 Barb (third from right) and other team leaders

As ACBL Unit 512 members begin to prepare for their fourth year of participation, Barb says that the team’s “results, participation and enthusiasm have increased greatly each year.” In her role on the chapter planning committee, Barb recruits and supports ACBL clubs in our area, helping them get started and giving them ideas on setting up their events and fundraising.

Barb and the rest of the planning committee have been very impressed by the hard work of ACBL clubs in our area. In 2017, ACBL Unit 512 raised just under $17,000. Barb shared that “our District set a new TLD fundraising record in 2017, as did several of the participating clubs.” Unit 473 in Reno, Nevada, raised almost $6,000. The teams are looking forward to continued success in 2018.

Steven Krzanowski, manager of The Longest Day, expressed his appreciation for the efforts of Barb and all of the ACBL participants from our chapter: “I am so thankful for ACBL’s leadership throughout our chapter and nationwide. Through playing bridge and hosting other events, they are voices for change related to Alzheimer’s disease. They don’t just raise money to help fund programs and research. They are broadening our outreach by building an engaged, purposeful community committed to ending this disease.”

Register or join a bridge team for The Longest Day. To learn more about the planning committee, reach out Steven Krzanowski, The Longest Day Manager, at 415.463.8507 or skrzanowski@alz.org.