A Future Robbed by Alzheimer’s

29-year-old Jasmeen Karan of San Mateo grew up with a mom she describes as “very loving, definitely a homemaker, a typical Indian mom.” Now roles have reversed and Jasmeen and her dad, John, are caregiving for her mom, Bibi. Bibi was diagnosed with Alzheimer’s three years ago at the age of 63. Her family’s story is one of building a life through sacrifice and dedication, only to have that life overshadowed by Alzheimer’s.

Bibi was raised Muslim and John Hindu. In those days their religious differences weren’t accepted so, in Romeo and Juliet fashion, they eloped. Jasmeen says her mom was always a “rebel, a pioneer, a free-spirit.” They came to the United States in the mid 1970s. 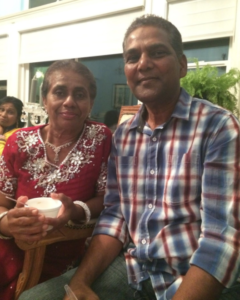 Bibi and John both grew up in poverty and, according to Jasmeen, “built their lives together with dedication and sacrifice.” After arriving in the States, they worked two jobs to make sure she and her older sister were provided for. She remembers her sister taking on some of the responsibility of caring for Jasmeen, as her parents worked day and night trying to make ends meet. “But there was always food cooked at home,” Jasmeen remembers. “Mom was a wonderful cook. The one thing I regret is not writing down her recipes.”

“Now it’s time for Dad and I to take care of Mom,” says Jasmeen.  Jasmeen and John work full-time jobs – she as a data analyst and he as a housekeeper, both at hospitals. They work in shifts so they can cover the round-the-clock job of caregiving. 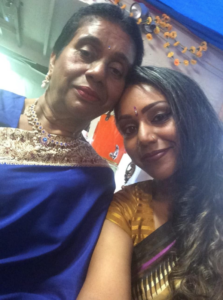 Jasmeen resents that Alzheimer’s has robbed her parents of the future they worked for. “They worked so hard, were so dedicated, all the time. They should be enjoying life now during retirement but Dad chooses to continue working to maintain his health benefits for Mom.”

Stigma around expectations of care continue to exist in the Indian culture. Families may be concerned about being judged for the disease and might be reluctant to reach out. Pride also plays a large role. “Communities are small, everyone knows everyone,” says Jasmeen. “Personal struggles are widely known and spread, even when families are still in the midst of coming to terms with the diagnosis and might still be struggling to understand the disease.”

Cultural influences have shaped the Karan family’s caregiving choices and experiences as well. “My dad is very traditional. In general, you only turn to your family for help,” says Jasmeen. “Culturally, the expectation is your kids take care of you. It’s just assumed. If you have a son, the assumption is there will be a daughter-in-law that comes into the home and takes care of the aging parents.”

In their family, however, it’s up to the two daughters. Her sister lives nearby, but is married. “Traditionally, once a daughter is ‘married off’ you leave them be to start their new journey with their husband and their husband’s family,” says Jasmeen.

Although caregiving requires much of her time, Jasmeen has career aspirations and life goals she hopes to achieve in the near future. She earned her bachelor’s and master’s degrees, and is currently pursuing a specialty in health administration. She says both her parents provided “immense assistance and support” for her education. She takes a lot of pride in her work and is passionate about improving patient care. “I had a goal of becoming a director at 30, but I’m not there.” She would also like to be married and have her own family someday.

For now, she has been able to push past some of the cultural barriers to get help with caregiving responsibilities. She has reached out to the Alzheimer’s Association regarding respite grants, and taken advantage of the 24/7 helpline for information and advice. Her sister is now able to provide care for a few hours a day, which Jasmeen says helps.

Finding Comfort and Having Faith

She says it also helps to have a sense of humor, and she tries to manage stress as best as she can. “My dad is my rock and my teacher. What we’ve taught each other is that you just have to laugh things off sometimes. We remind ourselves we’re doing the best we can and that we’re just human.”

She manages stress by taking breaks – something as simple as taking a walk to get some fresh air helps her recharge. She recently started dating again, and says that going out from time to time and having a supportive, listening ear, helps her cope.

Jasmeen says her journey as a caregiver has taught her compassion and patience, and given her a deeper understanding of the human spirit. She points out that one of the key Hindu beliefs is reincarnation.

“Don’t worry Dad, we’ll be living in royalty in our next lifetimes for all we’re doing and giving in this one.”