A Daughter Discovers the Power of Speaking Out About Alzheimer’s

Emilie Sanders Lee has experienced Alzheimer’s disease twice in her family. In junior high, her grandfather started showing signs of dementia. Years later, Emilie’s mother, Debbie, was diagnosed with younger onset Alzheimer’s disease at the age of 60. Talking about her mother’s illness and getting involved have helped Emilie feel supported and empowered. 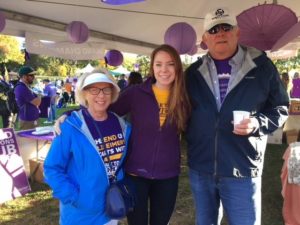 Part of what helped Debbie get a diagnosis sooner was that she was familiar with Alzheimer’s and recognized her own symptoms. Debbie and her sisters had cared for their father in the early 2000s, after he was showing signs of dementia. The daughters were long distance caregivers, taking turns traveling to his home to provide care. Emilie remembers her mother “being gone for weeks at a time.”

When Debbie was diagnosed, the family members struggled with how to respond. It was easy to deny that their mom had Alzheimer’s, and Emilie learned that “not everyone copes in the same way.”

Because Emilie and her two older brothers live many states away from their parents, the caregiving responsibilities for Debbie fall mostly on Emilie’s father, Greg. Emilie acknowledges that she and her brothers worry about the stress of caregiving on their father, but says that it helps that Greg has a strong support community in Florida.

The Benefits to Getting Involved 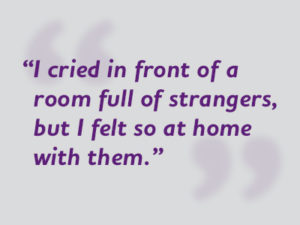 For the first few years after her mother’s diagnosis, Emilie “sat with the information.” Then, earlier this year she decided to host a charity ride at an indoor cycling studio. That’s how she met Ginny Roth, Chair of the Walnut Creek Walk to End Alzheimer’s, who invited Emilie to join the Walk planning committee. At the first meeting Emilie attended, each committee member introduced themselves and shared why they had joined the committee. As Emilie introduced herself and talked about her mom, she started to cry. But it helped because they understood what she was going through. “I cried in front of a room full of strangers, but I felt so at home with them.”

Emilie feels her involvement on the Walk committee has been a benefit to her personally. “Funneling my energy into something positive has been so therapeutic and has given me so much confidence. The more good I know that we’re doing, the better I feel.”

The Power of Sharing Her Story

Talking about her family’s journey has also helped. She said that it has brought her closer to her father, who Emilie says is “one of the best caregivers ever. My dad and I have become best friends.” 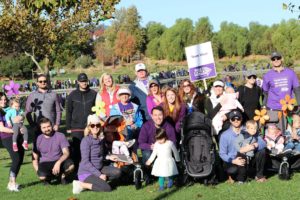 As Emilie started to share her mom’s story more publicly on social media, she was amazed by the outpouring of support from others. People reached out online and by phone – many asked what they could do to help. Others asked questions or shared stories of their own loved ones with Alzheimer’s or other dementias. The response she received encouraged Emilie to step out of her comfort zone to further reduce the stigma about Alzheimer’s.

While social media star has never been on Emilie’s bucket list, she launched a YouTube channel: Talk to End Alz. Emilie plans to chronicle her family’s journey with Alzheimer’s and help other families learn about resources such as the Alzheimer’s Association and Alzheimer’s research trials. Debbie is participating in a research study at the Neuropsychiatric Research Center of Southwest Florida. Emilie is hopeful that sharing her story will help others. “Although putting myself out there is scary, in order to get a big result, we have to take a big risk.”

Talk to End Alz with Emilie