Moments of Joy: A Caregiver’s Story 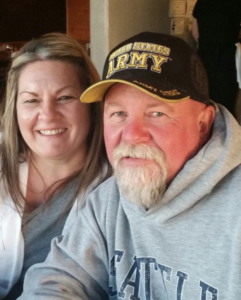 Scott and Katrina Thomas were married on March 20, 2005. Katrina says they picked the first day of spring as their wedding date “because it symbolized new beginnings.” Ten years later, in 2015, they began a different and unexpected journey when Scott was diagnosed with younger-onset Alzheimer’s disease at the age of 55.

Scott had to leave his job as a Class A driving instructor, and in fact can no longer drive at all. Katrina has had to quit her medical billing job to become Scott’s full time caregiver. Their Christian faith plays a big role in their lives, and Katrina says she couldn’t do anything without God’s grace. “When you are responsible for loving someone who doesn’t remember that they love you, that’s when God’s grace comes into play.”

The couple attends two support groups, one in Modesto and one in their home town of Oakdale. It was in support group that Katrina learned this: “Don’t get so caught up or be so angry at the disease that you miss out on the moments of joy you can still create with them.”

She now tries to create as many moments of joy as she can. Here are some she shared with us:

Going on vacation
“Last month we went on our first vacation since his diagnosis – to Bandon, Oregon. The three couples who went always used to go to Oregon together. They are all older than Scott, but Scott is the one in the group who has dementia.

We relaxed along the beach, and did a couple of activities we’ve never done before, like horseback riding. I wasn’t sure Scott could do it, but it was wonderful and the people there helping him out were great instructors. We also did glass fusing — art therapy has been huge for my husband. There’s joy in watching him because he still felt like he could do something. I know it helped him.”

Just sitting together
“When we’re at home, sometimes he just wants to be sitting on the couch, holding hands. Touch is so important for people with dementia. A lot of times it’s not about watching a movie or going somewhere, but just being together and holding hands. It’s not about the money you spend, it’s about what you do with your time.”

Mother’s Day
“I remember our first Mother’s Day after Scott’s diagnosis. He used to always bring me flowers on Mother’s Day. But I had just quit my job to take care of him, he had just resigned due to his diagnosis, and we were really in a tight financial bind. We couldn’t afford flowers that year.

But we live out on acreage, and it’s full of wildflowers. He went outside and he came back with his hands full of sunflowers that he had picked out of our weeds.

He brought them to me and said “Here you go. Happy Mother’s Day.” That was a huge moment of joy for me because I knew that in his heart, it registered with him that we couldn’t afford flowers – but it was still important for him to do something. And in his dementia moment he went and picked me those flowers out of the kindness of his heart.

That is a moment of joy that I will remember forever.”