Pulling Together for Mom: A Family Caregiving Story

After his smart, independent mom fell prey to an IRS scam, Brian O’Shea knew something was terribly wrong. He shared with us how he and his sisters pulled together after learning their mother, Mary, had Alzheimer’s disease. 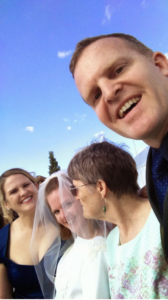 Deirdre, Katie, Mary, and Brian (from left to right) at Katie’s wedding

Mary O’Shea immigrated with her family from Dublin, Ireland at the age of 15. She settled in San Francisco, went to college, attended UCSF medical school, and eventually spent her career as a physician at Kaiser Permanente in Oakland. She and her husband Jim had three children along the way”” Brian, Deirdre, and Katie.

Her son Brian describes Mary as active, independent, driven and assertive. She volunteered in her community, practiced yoga, and even did a little ballet dancing. “She was the central figure in the family,” says Brian. She organized everyone, motivated everyone.”

Three years ago, the family suffered the loss of their dad, and around that same time Brian noticed that Mary “” now in her mid 70s “” was having some cognitive difficulties. “There were a lot of red flags,” he says. Mary would misplace things, then become suspicious that the house cleaners had stolen from her. She would sign contracts for work to be done on the house, then forget all about it. “She thought people were trying to cheat her.”

The siblings knew things were getting serious when their normally smart and independent mom fell prey to an IRS scam. “That’s when we realized there was something very different going on,” he says. Fortunately they were able to recover the money, and at that point convinced their mother to make an appointment with a neurologist. Mary was diagnosed with early-stage Alzheimer’s disease.

Being the independent person she is, Mary initially selected an assisted living facility on her own. As her disease progressed, Brian and his sisters became more involved in the care decisions, but found it difficult to find a facility where their mom was stable and comfortable. Mary was wandering, becoming increasingly agitated, and at times was angry and combative. “At some point in the progression of her disease those environments became too confusing and over-stimulating for her,” says Brian. Eventually the siblings decided to move her back into the family home in Orinda, with a caretaker during the day.

Pulling Together to Make it Work

Once Mary was home, the O’Shea siblings needed a caregiving plan to make it all work. As it turns out, they are a remarkable team. Every month they sit down and go over the caregiving responsibilities, dividing up tasks and scheduling time with Mom. They use Google Calendar to coordinate, and Brian says it’s working out pretty well so far.

Brian has moved into the family home with Mary, and professional caregivers stay with her during the day while Brian is at work. Deirdre, who lives nearby in Oakland, take turns with Brian to cover evening and weekend care. Katie, who lives in Los Angeles, comes up twice a month to give Deirdre and Brian a break.

“Everyone contributes in different ways, and we all work to our strengths,” says Brian. He does more of the hands-on part, getting his mom to do the things she is sometimes resistant to do. Deirdre is good at paperwork, and dealing with hospitals and insurance. Katie regularly makes the long trip up from Los Angeles. And while she isn’t able to spend as much time with Mary, Brian is quick to recognize “When Katie comes up, she spends the whole weekend with Mom, while Deirdre and I mostly spend mornings and evenings with her.”

To figure out how to be a better caregiver, Brian reads a lot, and watches videos online. He says Teepa Snow’s* videos have been particularly helpful. “It mostly involves making it her decision, giving her options, or asking if she wants to do something rather than telling her,” he says. “For example, if I ask “˜Are you tired mom?’ she invariably says yes, so when I follow up with “˜Oh do you feel like going to bed?’ it becomes an easy task – because she made the decision.”

Other things have helped too. They’ve installed a door alarm in her bedroom to keep her from wandering, which so far has been working. They’ve taken a proactive approach to maximizing Mary’s health and medications, so that she has the best quality of life possible.

They’ve also learned that it’s important to be open about Mary’s disease with people who are close to her. “At first my biggest fear was that talking about it would make people feel uncomfortable with my mother, and make her more isolated. But there’s really no way to hide it,” Brian realizes. “There’s no point in pretending there’s nothing wrong. It’s better to just be open about it with people who are close to her. She’s very lucky she still has friends who are close by and care about her enough to want to reach out.”

Planning for a Happier Holiday Season

Brian describes the modified approach the family will use to navigate the upcoming holiday season. In years past, Thanksgiving was typically held at their family home, and at Christmas the extended family would gather at the Vajk’s, Mary’s sister and brother-in-law. 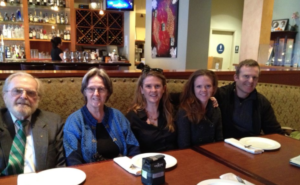 The O’Sheas at a family gathering before Jim passed away. From left to right: Jim, Mary, Deirdre, Katie, Brian.

“This year Thanksgiving will be very informal,” he says. “People can come by any time they want.” They still plan to cook dinner, but won’t have one time when everyone sits down together. That way, he says, it gives people a chance to see Mary for some time, and not feel bad if they feel uncomfortable or need to leave. “Or, if Mary needs to walk away, it doesn’t stand out that someone has left the table.”

Christmas will be at the Vajk’s, as is the tradition. The siblings game plan is to “show up a little bit late, and leave a little bit early,” says Brian.”If she is doing well, we will stay as long as she can comfortably stay. As soon as she shows signs of agitation, that’s when we know it’s time to start wrapping things up. Then we will bring her home and get her ready for bed.”