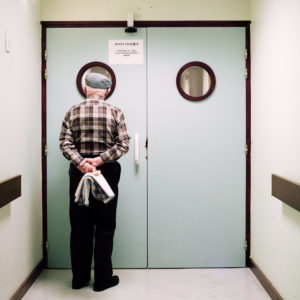 Maja Daniels, a Swedish photographer based in London, is the winner of the first Bob and Diane Fund grant – a visual storytelling grant, raising awareness about Alzheimer’s disease and dementia. Selected out of 83 entries from 22 countries, Daniels won for her project Into Oblivion, which documents life inside a geriatric hospital in the northwest of France. We talked to Maja Daniels to learn more about what motivated her to spend three years documenting the life of hospital residents with dementia.

Tell us more about yourself.

I have a sociological background and my work focuses on identity construction and human relations in a Western, contemporary environment. Ever since I first started taking pictures and thinking of them as stories, I have been interested to engage with contemporary issues related to the body – mainly to the limitations of the body – in association with notions such as self and identity. The idea of a “˜failing’ body is something that we in the west don’t seem to be able to accept. Disease, aging and dying thus represent big taboos. So, I am interested to consider how attitudes and trends within a society (culturally, socio-politically, traditionally) affect how we see ourselves and our bodies.

With these initial interests relating to documenting the western world, it just so happened that I started considering the general lack of visual representations of issues related to older generations. This is of course linked to our commercially driven, youth-obsessed culture, and how our modern lifestyles have affected – and diminished – the family unit. I did not have a personal connection to Alzheimer’s disease before I began working on this project.

What would you like your work’s legacy to be? 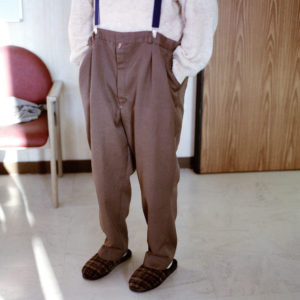 My ambition with this project was to try to shine a light on a subject that most of us might prefer to ignore. Aging represents a cultural threat that has a powerful impact on how we choose to lead our lives. In a society obsessed with youth, progress, beauty, individual achievement and success, where generations are increasingly segregated it is easy to ignore the implications of a growing aging population.

Today however, the increasing number of elderly people in developed countries is raising the incidence of age-related diseases. About 24 million people worldwide suffer from dementia, approximately half of these people have Alzheimer’s disease and scientists predict that the number will have tripled by 2050. The cultural burden that Alzheimer’s disease represent forces us to confront our mortality in a way that is not natural within western societies and our need to control our bodies.

The idea of losing our abilities, our independence, our memory, our constructed sense of self, is often described as the ultimate nightmare. It confronts us with the realization that our accumulation of experience, of life, will come to an end. Here, institutions such as hospitals and elderly care homes have come to play an important part in how we protect ourselves from the confrontation of these fears, stereotypes and negative connotations.

But, if we think of aging as something we do; something we become with time and experience, we might be able to counter these taboos over time. In terms of a shorter time-span, The Bob and Diane Fund grant will help me pursue the difficult yet important conversation that I think we need to have about how we conceive and care for people with Alzheimer’s disease.

What was it like spending three years with hospital residents in France? 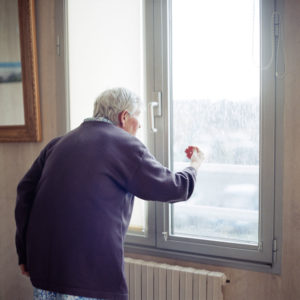 I was really dedicated to the life of the residents and my main interest was to spend time with them. To them, my presence became a welcomed kind of animation – I was there, available and in no rush. I participated in their activities and we went for outings but my main role became that of a human presence during the hours when the activities and the presence of staff were elsewhere. Spending time in the unit during the quieter hours allowed for me to better understand the course of the day from the perspective of the residents. I also came to realize the stark contrast between the times when staff were present and the times when residents were alone.

Throughout the project I grew very attached to the residents in the unit. I would keep in touch with certain family members whilst I was away, and it was painful to go through difficult times with them. The worst bit of Alzheimer’s disease is that the affected person will go through moments of lucidity where they realize that they are losing their memory. This can cause behavior difficulties such as aggressiveness, eating disorders, increased anxiety or depressive tendencies. It is also very common to have a strong urge to go “˜home’, often to an imaginary childhood home. This is where the constant wandering and the struggle with the door begins. That was very difficult to watch. If I was present in the unit, chatting to a particular resident or doing something with them, I could sometimes prevent them from entering this state simply by being there.

Have you noticed any differences in the public understanding of dementia between the different countries you’ve lived and worked in?

I think this is a common issue to all western countries. It is our very own fears and negative connotations of aging and dying that makes us comply with these societal structures. Whilst being busy living an active, productive life we are perhaps relieved on a day-to-day basis by the possibility to be able to turn a blind eye to what is so conveniently hidden away from us by the geriatric institutions and care homes. My goal with this project was to try to make us think about our institutionalized, modern way of living, and perhaps be able to critically question certain care policies – such as the use of confinement as an aspect of care – by seeing the effects that they can have on somebody’s life. I would like for this series to encourage developments of new forms of care in specialized institutions, which, of course there are already many great examples of out there.