Good Grief Cooking: One Caregiver’s Quest to Heal with a Meal 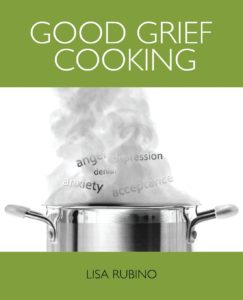 Walnut Creek resident Lisa Rubino has had a challenging journey with Alzheimer’s and the grief that came with losing her husband. Yet she found the strength to channel her emotions and passion for cooking into a cookbook, full of soul-nurturing recipes and advice on how to eat well while enduring depression. She’s generously allocated 25% of all book proceeds for the Alzheimer’s Association. We invited Lisa to be our featured guest blogger for National Family Caregivers Month. Read her first post below.

My name is Lisa. I’m a baby boomer and a woman of honor, decency, love, and compassion. By profession, I’m a teacher and I’m also a television producer and author, but my real passion is cooking. When writing my second book, I truly didn’t know I was also suffering from anxiety and depression, as well as negative thinking. When I acknowledged the grief and confronted other emotional issues, it was then that I could truly recover. The fears that pounded in my head with whispering self-doubts, afraid that someone would judge me or think I was crazy, were thrown out of the kitchen and into the garbage. Problems and difficulties are always with us, but mine were suddenly blown out of the steam pot and into the frying pan.

My advice to all caregivers is don’t look too close, as “the mirror, mirror on the wall” reflects an image of one that will soon fall. Maybe your grief isn’t easily shared and stuffed away, but now you have to make a choice – you either rise above the past and make a difference, or you remain controlled by the past, and make excuses. That’s what propelled me in becoming proactive for Alzheimer’s, as I too experienced some life crushing, punishing moments that have propelled me to write my second book, “Good Grief Cooking.” As a published writer, I’m so privileged to blog for the Alzheimer’s Association.

My Roots Are Showing 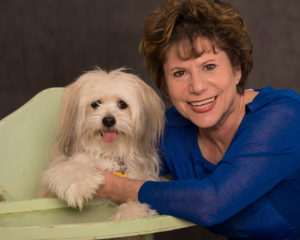 I was born and raised in San Francisco. I was born tongue tied, and couldn’t speak well until age three. However, from the onset, I had a pronounce lisp. That didn’t hinder me from hosting plays in my garage for the neighbors, and taking the stage at school plays. I was a really sanguine, and my outgoing personality was hard to stifle.

My parent’s family were born in Italy, and where we lived was bustling with Italian immigrants. There was a pasta shop on Geneva Avenue, owned and operated by two robust women from Genoa. They were sisters, and so the problems began. All pasta was homemade by the siblings, and on any given day, one sister would push her pasta as the one to buy. No matter the banter, I loved that pasta.

There was a superb deli on Mission Street, run by two brothers, with the best delicatessen in the area. Of course, the owners were Italian. Besides the best cold cuts and sandwiches, most folks depended on this duo for entertaining, and would order party trays to be picked-up on a specific day. That’s if they weren’t fighting… I remember being with my mom, and trying to grab our order and go. Boom, a verbal assault ensued between the brothers. My mom streaked, “We’re not going to get our order”. She prayed, and got lucky this time. They pressed the tray into her hands, took her money and we promptly left, hearing the door slam behind us. Yikes, emotional people we are, and very passionate about our food as well.

As I entered middle school, my lisping became more pronounce. The kids would tease me, and I tried to disregard their insults and never even heard the word bullying. When I was in school, “picking on someone” was a phrase used. High school brought on new challenges, but being taught by Nuns in Habits, was a real gift. A wonderful Sister would spend one hour after school each week, helping me overcome my speak impediment. It worked, and now the tongue was real to roll.

On to college, marrying my Italian childhood sweetheart, having two children, two dogs, and finally earning my teaching credential. Then we left our hearts in San Francisco, and moved to the burbs.

My first teaching position was working with mentally ill adults and teens, which launched my career. It was mid-1970’s when the mental institutions were closed, and people were forced into an unfriendly, unloving environment. They found safety in our program. Most lived in board and care homes, funded by the state. They had very little spending money and were always hungry, because the meals served by their living facilities, were meager at best.

I rousted up my Italian heritage, turned up my sleeves, put on the apron, and became The ShortCut Cook. I made food for 63 people in less than 1½ hours. My cooking days increased, as so many of my students were very hungry, and this launched my television show of the same name – “The ShortCut Cook”.

My business partner, Terrie, was tall and blond, and I’m short and dark-haired. The camera had trouble managing the height difference. This was the first and only television cooking show that for ½ hour, was live to tape. No stopping, no editing, no retakes. What you saw was what you got. And this dicey show was all of that. I was a spunky host that needed no Q-cards to banter with the TV audience, and made five recipes in less than 30 minutes.

Each show was seasoned with a special guest from national companies who shared their recipes.

We were going gangbusters, but on the home front, my husband was exhibiting peculiar behavior. Both Terrie and myself worked 60 hours a week on the television show, writing a monthly newsletter and designing recipes. However, something was terribly wrong on the home front. My husband, a firefighter, was behaving oddly, and his smell had become very pungent. We were married over 30 years then, met at 15, so I could tell something serious was on the horizon…

Stay Tuned for Lisa’s Next Blog