Why I Walk: William’s Story 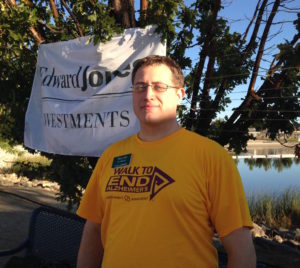 My experience with Alzheimer’s started in 2001 when my grandfather died of what was described to me as senility at first, and then I was told it was dementia a few years later. I was in my early 20’s and thought nothing of it… People in their 80’s just forgot things.

It was not until 2009 or 2010, when I learned that my grandparents on the other side of my family both have a form of the disease, that I started to pay attention. My other grandfather has Alzheimer’s and still is at the early stage with medicine holding it in place. My grandmother was also diagnosed with senior dementia.

So this cause is important to me, not only because my grandparents have the disease, but I have families I work with in my practice that are currently living this tragic disease, also. I am a financial advisor with Edward Jones. Over the years, the company has helped many families with their financial affairs when dealing with dementia and Alzheimer’s.

I have learned of many great resources in the process, such as elder protective services, memory care center, guardianships and other local programs, to help my clients. Through all that I had only seen the Alzheimer’s Association as a national program to find a cure, not something in my own back yard in Reno that would help my family and my clients. I had been to an Alzheimer’s Walk before, and still had that impression.

I say this because it was not till January 2016, when Edward Jones announced that is was the National Presenting Sponsor of the Walk to End Alzheimer’s, that I learned there was such a thing as a local chapter, and that it offers educational and outreach programs. That would have been useful to know a few years ago… so due to my own experience, I now actively try to reach out to the community and make sure they are aware of the local chapter and that it’s there to help them!

How it all happened was surprisingly simple. When Edward Jones’ back office support asked if anyone was interested in helping with our local outreach, I responded immediately. They replied back asking how involved I wanted to be and I said almost jokingly: I have 3 grandparents left, two with dementia and the third one is Polish, so if I want to help my family, I need to help find a cure. 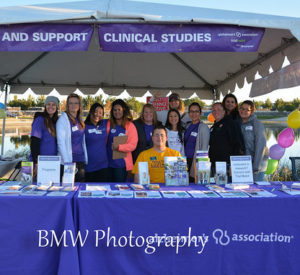 They told me to contact my local Alzheimer’s Association chapter and ask if they needed help. I walked into the Reno office and said: “If you need anything, let me know, I am here to help from volunteering to helping educate others on what I have learned. They offered me to volunteer for the Walk, which was great due to my firm’s support of the cause. I could also learn more about what is out there to help my grandparents and my clients.

We are now also working on educational meetings for the public to attend for free. And thanks to what seems as fate, I am proud to say I am part of this great organization and plan to be a part of it until there is a cure. I want my family to be safe and sound, and I want to tell my clients, many of whom have become friends, that they no longer need to worry.

Right now I sit as the Mission Chair for the Reno Walk to End Alzheimer’s, and the Edward Jones Northern Nevada Regional Coordinator for the Walk Partnership. I also work with the Community Foundation of Western Nevada Caregiver Support Initiative, and will be next year’s Secretary at AskSara, which is a is a free contact service for those who are facing life changes such as caring for aging parents. AskSara helps them find people who can help with planning for their financial future, navigating the health care system, or getting their legal affairs in order.