Why I Walk: Denise’s Story

I am Denise Glassett. It has been 7 years since my husband Roger was diagnosed with Early Onset Alzheimer’s disease at age 55. 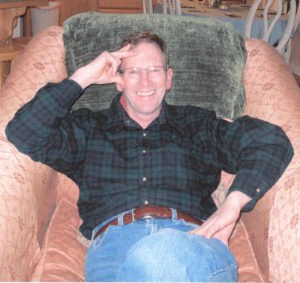 There were behaviors in the year prior to the diagnosis that let us know all was not well, but we didn’t know what was wrong. Roger had been a high school and Jr. high school math teacher, as well as a mechanical engineer and licensed building contractor. He began having difficulty while tutoring some students in algebra, which was very unlike him.

There were other things he was having trouble with in his construction work, too. Finally, the doctors ran all kinds of tests to rule anything else out before coming up the the dreadful diagnosis of Alzheimer’s. There were tears shed by both of us. We tried to find out where it came from. Was is work related, genetic or what? In talking with family we do believe there is a genetic factor since his grandmother and a cousin had the disease also.

My first reaction after the tears, was to find out all I could about Alzheimer’s disease. I went to the internet and soon found the Alzheimer’s Association. I read all about it and especially was interested in the 7 stages of the disease. I also contacted Valley Caregivers in Fresno and received emotional and some financial help. I still attend the monthly support groups. That was also the beginning of mountains of paperwork to get our affairs in order.

Our life went on fairly normally for the first couple of years. But gradually, my husband had to close his construction business. He could still be at home and do things on his own. He loved to ride his bike around town and still feel helpful around the yard and house. I continued to teach school also.

But as the disease progressed, I could no longer leave him alone. He began to have trouble communicating through speech and could no longer read or write. So I hired help and I enrolled him in an adult day health care program where he could be doing some stimulating activities and be watched over. There was someone to be with him in the morning between the time I went to work and before he went to his program. Then I had someone to help in the afternoon, until I got home from work.

At the end of that school year, I decided I would retire early so that I could take care of him. It was a hard decision, but turned out to be the right decision. That was the beginning of my full time care giving. I tried to get him out of the house each day to do something with me. We went walking together and sometimes on bike rides. 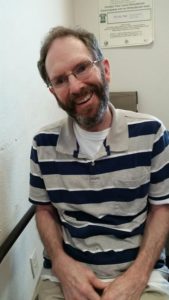 During this time we also participated in a trial for a medication to help with the 4 A’s – agitation, aggression, anger, and anxiety. We traveled to Fresno every 2-4 weeks for which we were paid. At the end of the trial, and he was no longer on the medication, I could see a big difference. It will be a while before that medication is available, but it will be a good one. I would recommend participating in a trial to help future patients.

After 2 full years of care giving, I was getting burnt out and Roger’s behaviors were getting harder and harder for me to handle on my own. I needed help. I decided to get in-home respite care. I also had a great support system with good friends, neighbors and church friends. They would come in to sit with Roger so I could take care of errands or mow the lawn or other yard work. He would wander off when out in the yard with me. Luckily all the neighbors were aware of his condition and kept an eye out for him.

But I could not continue doing it on my own. I then got an in-home care giver who came 5-6 days a week for 6-8 hours. I also decided to go back to work part-time to give me
something to do other than care giving. I was feeling home-bound. Our in-home caregiver helped immensely until she had to go take care of her mother, who had had a stroke.

I had already been looking into residential care facilities, knowing that the time was getting close. But now I had to move the date up. So last December, Roger entered a care home. It was not an easy thing to do. I felt extreme guilt. The day after he entered, I went to visit and when he saw me, he bent over crying as I walked to him and held him tight. What had I done? It took several weeks for him to adjust to being there and for his new caregivers to learn how to take care of him. It was a challenging time for all. Now he is doing OK, though the disease continues to progress. There are times when he no longer seems to look at me or focus with his eyes.

This disease is so sad to see in your loved one. It is as if you are watching someone die a little bit every day. I feel like I have been in mourning for 7 years already. And
though I do not want to be without my husband, I am already without my husband. There is very little of him left, but once in a while I still get a smile, a funny face, or a hug that seems to come from him. My faith in God has been a great strength to me, too. I feel God’s love for me and know that Roger and I will be together for eternity and both of us will be perfected in Christ. Roger will be Roger again.