Why I Walk: Candy’s Story 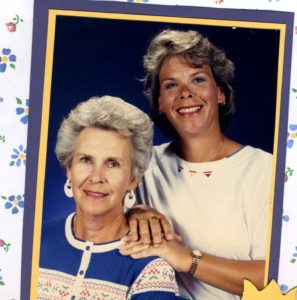 Candy Berlin has been involved with the Santa Cruz Walk to End Alzheimer’s for nine years now. Her mother, Shirley, was diagnosed at the age of 73 and passed away in 2007. Candy’s family went through a difficult journey with Alzheimer’s but in addition, her mother was initially misdiagnosed with senior depression and taken down the wrong path. Now Candy is doing everything in her power to raise awareness and help in the fight for a cure.

How did you get involved with Walk?

I got involved in 2008. Our family went through the struggles that you go through as you learn about the disease, and how to deal with a family member that’s been diagnosed. The Alzheimer’s Association showed us a lot of resources, respite care and tools. They were really gracious. So I got involved with Walk to keep my mother’s legacy alive and give back to the organization. I initially found out about the Walk from the newspaper and the first year it was just my husband and I, walking as a team. 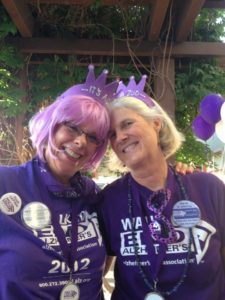 The next year I asked a couple of friends to donate, sent emails to family members and they started donating. Shortly after, my friend Nancy Knudegard joined and she has been our biggest fundraiser. This is her sixth year being on my team.

What has your Walk experience been throughout the years?

The Walk itself to me is really inspirational. I think it’s the biggest and most important tool to raise Alzheimer’s awareness. You can do a lot of print and media, billboards, television and online ads, but if you actually participate in Walk, you see everybody come together and feel the emotion of people that have lost someone. You particularly feel the emotion of those that are still struggling with the disease and their loved ones are maybe at the end stage. 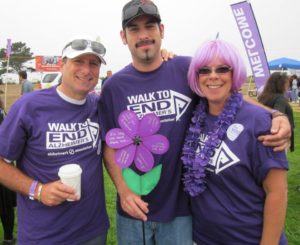 Seeing everybody dressed in purple, with balloons and flowers everywhere, is very uplifting. It really makes you feel that everything you’re going through, somebody else is, too. Also, we’re so lucky here in Santa Cruz as we get to walk on the beach. We walk in the sand with the waves so we really have one of the most beautiful spots in the country.

Throughout the years, we’ve made our Walk a family affair – my husband walks with me every year, he was my mother’s caregiver along with me. My brother and sister come up from the desert (Palm Springs area) to walk with us. My son is also flying into town for his fourth Walk this year. It’s a great way to honor his grandmother.

I like the fundraising part of Walk, my team is really enthusiastic and we come up with a lot of fun events – from wine tasting and margarita making to card making and other crafts. This year we found a local wine maker – Denis Hoey – who not only let us use his winery for an event but is now making five hundred cases of a special edition “Forget Me Not” wine, with all proceeds going to the Alzheimer’s Association.

Do you have any advice for others going through a similar experience? 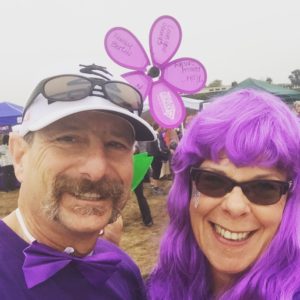 It’s so tough because Alzheimer’s is so individualized, everybody’s experience is so different. For some family members, the symptoms might exhibit in episodes while others would need constant care. My advice is talk about it. In my mother’s case, she was misdiagnosed for the first two years with senior depression so she was given mood-altering drugs. She was taken down the wrong path and we didn’t know any better. We had no idea what she was going through. The more you know about it, the better you’d be at recognizing some of the pattern. That is my only regret – that we didn’t know sooner.

As far as Walk fundraising, my advice is to just start small and don’t get overwhelmed by people who are raising ten or twenty thousand dollars. Don’t think you can’t do it because you don’t have the connections or the time and energy for it. Just sign up, put on a purple t-shirt and come walk with us. Our team started small and then many others joined. You don’t know who’s going to join your team. You start talking about the disease and you find out how many people have been affected by it.

I continually tell people to come to the Walk, just come walk with me. If you want to sign up, sign up. If you don’t, just bring your dog and come on out in the morning on the beach.