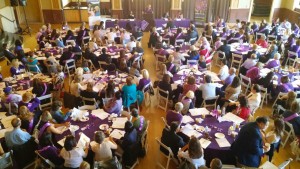 Wednesday April 29th marked the 15th annual California Alzheimer’s Association Advocacy Day. We had volunteers from all over the state come join us, 252 in total (140 from our Northern California and Northern Nevada chapter, 64 for Southland, 31 for Orange County, 9 for Central and 8 for San Diego), which is our largest turnout yet! The best part about organizing such an event is seeing the diverse mix of people from all over the state and from all kinds of backgrounds who have been affected by Alzheimer’s. Everyone united under one roof for one cause! 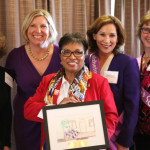 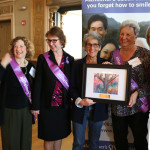 We spent the morning educating participants about our state policy priorities, SB 613 (Allen) and AB 1526 (Aging Committee), which led to many great questions and observations from the audience. We also presented awards to State Senator Hannah-Beth Jackson (D-Santa Barbara) and Assemblywoman Cheryl R. Brown (D-San Bernardino) in recognition of their leadership to improve Alzheimer’s care and support.

Honoring and hearing from these legislators energized our advocates, and helped them to go into their meetings with the confidence to speak up and raise awareness in the Capitol! This year, more than most, it was important to raise awareness due to the new influx of legislators (72 out of 120 have served for only two years or less). 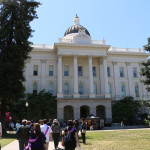 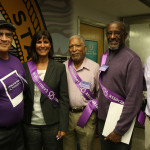 Thanks to great work on Advocacy Day by long-time advocacy volunteer Robb Fanno, newly elected Assemblyman James Gallagher (R-Nicolaus) has offered to introduce a resolution acknowledging June as Alzheimer’s and Brain Awareness Month.  We are delighted to welcome a new champion into the fold, and to work with Assm. Gallagher to identify colleagues in the Assembly and Senate, from both the Republican and Democratic sides of the aisle, to sign onto a joint resolution. 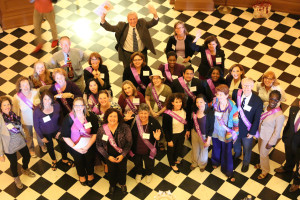 Our team of advocates on the Statehouse floor.

2015 was our best Advocacy Day yet, raising awareness in the Capitol and empowering scores of new advocacy volunteers to go back into their communities and advocate for change. Our policy advances would be impossible if it weren’t for the volunteers who commit their time and passion to engaging their legislators in our fight.

Here’s what some of our advocates had to say: