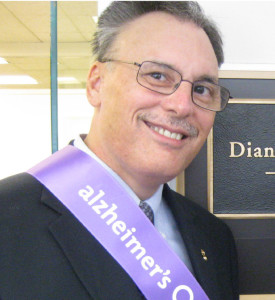 Many people with younger onset are in their 40s and 50s. They have families, careers or are even caregivers themselves when Alzheimer’s disease strikes. In the U.S., it is estimated that approximately 200,000 people have younger onset.

Since health care providers generally don’t look for Alzheimer’s disease in younger people, getting an accurate diagnosis of younger onset Alzheimer’s can be a long and frustrating process. Symptoms may be incorrectly attributed to stress or there may be conflicting diagnoses from different health care professionals. People who have younger onset Alzheimer’s may be in any stage of dementia – early stage, middle stage or late stage. The disease affects each person differently and symptoms will vary.

Doctors do not understand why most cases of early onset Alzheimer’s appear at such a young age. But in a few hundred families worldwide, scientists have pinpointed several rare genes that directly cause Alzheimer’s. People who inherit these rare genes tend to develop symptoms in their 30s, 40s and 50s. When Alzheimer’s disease is caused by deterministic genes, it is called “familial Alzheimer’s disease,” and many family members in multiple generations are affected.