My journey with Alzheimer’s and BvB 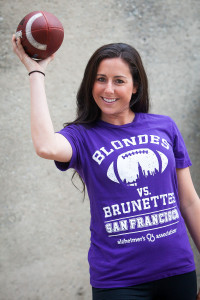 I have never played flag football, but earlier this year I found myself promoting a legendary flag football game at Candlestick Park, which included a ton of NFL stars celebrating the legacy of ‘The Stick.’ Someone from the Alzheimer’s Association Blondes vs. Brunettes (BvB) contacted me to inquire about partnering to cross promote the games and I was immediately intrigued. Although it didn’t work out, I’m so happy I was introduced to the Blondes vs. Brunettes game to raise money for the Alzheimer’s Association.

Last year, my father was diagnosed with Alzheimer’s. It was a long hard journey to get his diagnosis and everyone told me along the way it doesn’t matter since there isn’t a cure, but that didn’t stop me. I took my dad to numerous specialists all over the Bay Area and finally someone at Stanford gave us the dreaded news. Looking back at the day, I was pretty numb. I knew my dad had dementia for a few years but after hearing those words I was numb, in shock and in denial. I did some research and tried to get him on the best medications possible and supplemented that with natural healing but it pretty much stopped there. Being an only child and always being my dad’s little girl, I didn’t know what to do. 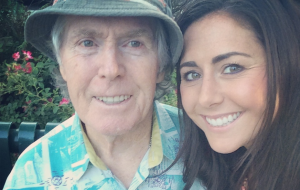 Adapting to the changes in my dad’s personality and daily life has been beyond what I could have ever imagined dealing with. My dad just turned 70 and is probably somewhere in the mid-stage of the disease. I try to spend as much time as I can with him and cherish all of our moments deeply. I try to focus on the present and block out the future because I’m terrified of what’s to come. After many long months on the waiting list, I finally moved him into a safe assisted living community in San Jose this July, and am patiently waiting for him to settle in. It’s eye-opening to see how many other people are going through the same thing and how supportive this community is. I had no idea until I became involved with BvB and am so grateful.

It took me a long time to even say those two words, “Alzheimer’s disease,” but after joining BvB I’ve become more informed about the disease and am starting to feel empowered and not as scared. I’ve worked so hard to raise as much money as I can so more research can be done for this horrible disease. I believe everything happens for a reason and if you know me you’ll know I use the word “fate” a lot. My involvement with the Alzheimer’s Association Blondes vs. Brunettes couldn’t have come at a better time. Although I joined the team late, I’ve already met so many strong and educated people and I’m so happy to have the support and all the new friends who care so deeply about this disease, like I do! I’ve never played football before but I’m having so much fun learning about the game and supporting a cause very close to my heart.

I hope you will join me as I continue to fight for my father and everyone else who has ever been effected by Alzheimer’s and support the team on August 23 on Treasure Island! Go Brunettes!