It’s been a busy year since I became an Alzheimer’s Association volunteer advocate. I’ve met with Senators and Congresswomen in Washington DC, attended town hall meetings, written letters to the editor, blogged and walked the halls of the California State Capitol, all to publicize the urgent need for action against Alzheimer’s disease. Last week I experienced something new — getting drenched to the bone in driving rain to raise awareness for the cause! (See “before” and “after” pictures below.)

The event was the 2013 San Francisco Walk to End Alzheimer’s, held on the last day of summer, which ultimately proved to be the second wettest September 21 in San Francisco since record-keeping began.

As the 500 volunteers and 4,000 walkers arrived in Mission Creek Park, the weather seemed normal enough: a little cool, a touch cloudy, all-in-all a typical morning in the foggy city by the Bay. We were there to remember and honor loved ones; to raise funds to support research, programs and services for families; and to increase public awareness about Alzheimer’s disease and the urgent need for a cure.

As a volunteer advocate, my assignment was to circulate among the participants, asking them to add their voices to those fighting Alzheimer’s disease by signing “walk cards.” This year, the cards urge our senators to:

In 2012, more than 5,000 walk cards had been collected at the Alzheimer’s walks held in Northern California. Last fall, along with the Association’s Policy Specialist Kimberly Weber, I had the privilege of delivering the cards, bursting out of an enormous box, to Senator Feinstein’s office in San Francisco. The cards are an impressive physical representation of how many Californians want to make ending Alzheimer’s a top health priority. Our goal this year was to collect even more signatures at the 17 walks to be held throughout Northern California.

For two hours before the walk began, participants signed in, donned purple t-shirts and sashes, created “promise flowers,” and listened to inspirational remarks and upbeat music. The mood was festive and friendly. We advocates roamed the crowd, talking about legislative priorities for Alzheimer’s disease and answering questions: What happens to the cards? We sort them by zip code and hand-carry them to the senators’ offices. Do they have an impact? Definitely. Senators want to hear from their constituents and understand issues that matter to them. Volunteer advocates keep in touch with the senators’ offices and, as legislative issues arise, remind them of their constituents’ concerns.

As the 2013 Walk officially began, the skies were darkening, and some raindrops had started to fall. Still, though I had neither an umbrella, a raincoat or a hat, I was undeterred. Everyone knows it never rains in San Francisco in September! Confident in my weather prognostication, I set off with thousands of other walkers, carrying my purple “promise flower” in memory of my mother who died of Alzheimer’s in 2011 after a 15-year struggle with the disease.

We made our way across the Third Street bridge, past AT&T Park, and north along the Embarcadero. With each step, the rain fell harder and harder, and I began to regret I wasn’t better prepared. My mascara had started to run, my shoes were getting soggy, and my hair — let’s not even go there! Through the mist, I saw signs up ahead: 1.5-Mile Walkers Turn Left; 3-Mile Walkers Continue Straight. Great, I thought, formulating my strategy for an early exit. Who would miss me? Who would know? But as I got closer to the 1.5-mile turnoff, I noticed something remarkable. Most of the people, including older folks and people with toddlers and baby carriages, were continuing straight ahead. Though the rain was falling heavily now, they weren’t taking the easy way out.

In that instant, it occurred to me that this year’s walk was a nearly perfect metaphor for living with Alzheimer’s disease. Like that morning’s rain, Alzheimer’s starts slowly — a drop here, a drop there — so that it can take a while to figure out what’s actually going on. But with Alzheimer’s there comes a moment — just like the torrent that began after we set out on the walk — that makes it impossible to deny there’s a problem. And from that moment on, for people living with Alzheimer’s and their caregivers, there are no turnaround points, no easy off-ramps. At least, not yet.

All of which reminded me why I and 4,499 people had gotten up early that morning, when each of us could have chosen to do something else, something easier and drier: 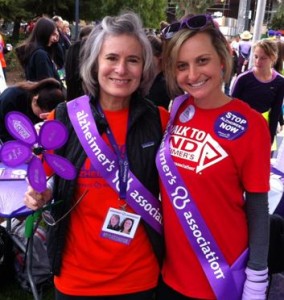 With Kimberly in the Advocacy booth, just before the walk began. 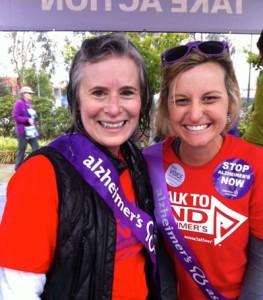 With Kimberly after the walk, soaked to the bone, but happy.

We’re here to remember and honor loved ones; to raise funds to support research, programs and services for families; and to increase public awareness about the devastation caused by Alzheimer’s disease and the urgent need for a cure.

So, I didn’t turn left at the 1.5 mile mark. Instead, like thousands of other intrepid Alzheimer’s activists, I kept walking straight along the Embarcadero, proudly waving my promise flower at folks in cars passing by, getting more and more bedraggled with every step. We were a motley but happy crew, and we undoubtedly made an impression on all who saw us.

After completing the three-mile course, I returned to the Advocacy table to say goodbye to Kimberly. It had been years since I’d been drenched in a rainstorm, and I was looking forward to getting home for a hot shower and clean clothes. My assignment was done for the day, but I knew that for people living with Alzheimer’s, the challenge will never end, until better treatment, prevention and ultimately a cure is found. The 2103 San Francisco Walk was over, but our work to defeat Alzheimer’s continues. Join us!