Why I Walk: Monica’s story

Yet another inspiring family taking up the cause for a wonderful man. It makes me so proud to see families like this who take action in spite of the sadness we experience with this disease. 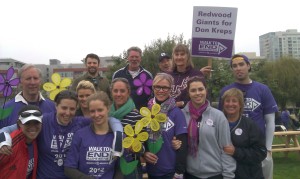 It’s September and football season has begun. My father Don loved football, and even played it at Palo Alto High School. He played center, as did my brother Dan and my son Ross. A special tradition in the Kreps household was the “Big Game.” Don, a graduate of Stanford University, and Eileen, a graduate of Cal would play records (you remember those) of the two university’s fight songs.

Don, being the good sport he was, knew all the lyrics to both teams’ fight songs. He could sing every Cal fight song with gusto and every Stanford fight song with pride. Don and Eileen would teasingly try to get all family members to declare allegiance to their university. Eileen would ruthlessly remind us that she ruled the kitchen and if we wanted dessert, we’d better be rooting for Cal.

This year has been particularly sad as we have seen my father decline rapidly and steadily. I was one of the last people he knew, other than my mother, and when I visited him on Father’s day my heart just about broke that he didn’t know me. Alzheimer’s runs fierce and strong in my father’s side of the family. His father died of the disease, his older sister and his younger brother also died of Alzheimer’s.

About 10 years ago, we began to recognize early signs with Don. My oldest son was a senior in high school at the time, and having some challenges with his math course. I told him to go see grandpa because he taught mathematics and science for over 40 years. My son told me, “Mom, Grandpa can’t help me anymore.” That’s when you know that a higher level of thought is going.

As a family it has been very hard to watch the best dad EVER, best husband (my parents will be celebrating 67 years of marriage on 9/15 this year) best grandpa and best person you could ever meet, stop being with you and stop being himself. I’ve heard that Alzheimer’s is called the long good bye, and that’s what this process has been for us.

Don influenced so many people and was an inspiration to so many during his tenure as principal of Redwood High School in Larkspur, and then as a teacher. The outpouring of support our team and family has had from the Redwood community and our friends has been amazing. It’s also wonderful to see the younger generation being aware and getting involved. My son and his girlfriend have raised over $1,500 for our team! That’s inspiring. Being involved with the Alzheimer’s Association and the Walk has made me believe that we must find a cure, and we will. We must do this for our children and grandchildren.

The last football game Don attended was back in 2007 when he went to watch his grandson Ross play for Marin Catholic. He never got to watch Ross play in college. There’s so much Don is missing from my children’s’ lives that I know he would have loved to share with them. What would make him proud is how they are stepping up and getting involved with the cause to end Alzheimer’s. We need to find a cure. Not for Don, but for all who will follow if we don’t.

Donate to Monica and her team: Team Redwood Giants for Don Kreps

Or register for Walk today: Walk to End Alzheimer’s