National Caregivers Month: Sam struggled with feelings of resentment towards his mother with Alzheimer’s

As many of our Alzheimer’s community is aware, caregiving is incredibly stressful – especially when giving care at home without little outside help. Today we have a blog by Sam, who struggled for years as a primary caregiver for his mother, who passed away with Alzheimer’s disease this past June. Remember to add a tribute to the caregiver in your life at www.alz.org/nadam. 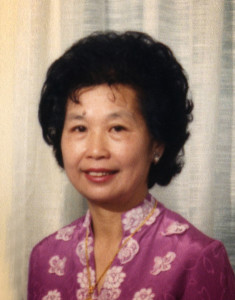 We first realized something was seriously wrong with our mom when she got lost going to my sister’s house. She had gotten off of the bus at the right stop, but could not remember which house my sister and her family lived in. She wasn’t usually very late, so my sister finally went outside to look for her. That’s when we realized she had been wandering in the neighborhood for a long time, perhaps two to three hours.

A few months later, she went out grocery shopping and went missing overnight. The police found her wandering miles away with no recollection of how she had gotten there. She was still carrying the chicken she bought from the store, but it had spoiled because she had kept it with her from the previous day. That was in 2005.

Over the next few years, her abilities and skills disappeared one by one, some slowly, some quickly, as if overnight. Sometimes she knew there was something wrong in her life but mostly she was confused and repetitive.

While she was still able, she would go to Chinatown and order food for dinner – but oftentimes she would come home and find she had already bought the same food earlier in the day. She would try to hide it from my sister for fear of getting in trouble for doing something wrong.

During the day when my sister worked, she had to hire a caregiver to watch our mom. When the caregiver arrived each morning, my mom would welcome the new visitor. But after a couple of hours, she would become confused and wonder why this stranger was in her home. She would urge them to leave and eventually become angry and almost violent when they wouldn’t. Since she could not get this person to leave, she would storm out of the house herself. Often, the caregiver would have to run after her, and sometimes pull her back out of traffic.

One day, she just lost her ability to speak or communicate. It is as if she just shut down and turned inwards into her own world.

I decided in 2009 to move back to San Francisco from Los Angeles so that my sister would not have to bear the caregiving burden on her own and we could reduce the cost of hiring a full time caregiver. The next three years were the most difficult as we watched our mom literally slowly disintegrate.

She went from about 120 lbs down to probably about 70 lbs or less. She became bedridden. We decided she would get the best care if we kept her at home and cared for her ourselves for as long as we were physically, mentally and emotionally able to. I am a graphic designer, which allowed me to work mostly from home but slowly my job had become that of a nurse for my mom.

I learned to feed her, often taking over an hour for a simple meal. I learned to bathe her, change her, transfer her to a commode and wipe her; basically all the things that one usually associates with an infant, however, without the joy one would expect from a baby. This was only made easier by the fact that I had someone to share these responsibilities with.  I constantly struggled with resentment towards my mother as well as guilt and obviously, depression.

It reached a point where I no longer considered this person to be my mom and that it was only necessary to keep this person comfortable and preserve her dignity. I often felt like she was a zombie, already dead, but without the trying to eat brains part.

My mom died peacefully in her sleep this past June. I felt happy that she was no longer in pain or suffering; also happy that I was released from the chores associated with taking care of her. As selfish as this may sound, it was as if my own life had been on hold for the last three years. Now I am finally able to move forward with my own life and do what I want to do.