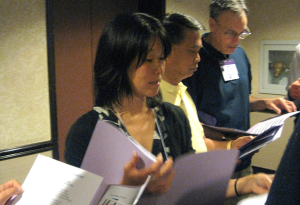 Phuong Quach gets debriefed on the issues at the Advocacy Forum

When we first came to the United States as refugees from Vietnam, my father worked in a cereal factory with a starting wage of $3.75 per hour. Soon after, my mother also started work in a factory. With long hard hours of labor and determination, they were focused on the American Dream. Over the years, we really did become the poster family for the American Dream.

My parents were able to buy a home and a new minivan. All four of their children went to private liberal arts colleges, received advanced degrees and now have good careers. We made it and truly became Americans.

The dream started to crack when my mom was diagnosed with Alzheimer’s ten years ago. After everything she had already gone through, this was completely unfair. And this certainly wasn’t in the dream plan.

This past week, I attended the Alzheimer’s Advocacy Forum in Washington D.C. It was informative, emotional and inspiring. I immediately felt close to people I’ve never met before. We were all there as advocates, pushing our government to do more. I was struck by the diversity -political, racial and generational. I was moved by the openness in the personal stories of both caregivers and those living with Alzheimer’s. I was impressed by the organization and thoughtfulness of it all. We’re all such different people, yet we share a common voice and a very serious agenda.

As I listened to a speaker say, “This is NOW the time for all of us to take action on Alzheimer’s. We need our elected officials to listen to US.” I thought to myself, this is definitely something my parents would not have ever understood.

My parents grew up in a country in fear of communist control and corruption, and fled their country for that reason. I am now participating in the democratic process in a government that embraces citizen engagement. I thought, this is perhaps what the American dream is really all about.

As citizens of this country, we really can make a difference. We can have a voice. We can shape how we want our lives to be.

I know the advocacy work in DC will not help my mother, but I have a feeling if she were to understand what was happening last week, she would’ve been incredibly proud. And this would’ve been a part of her dream too.