The symposium continues with a session focusing on research in the area of imaging and biomarkers. 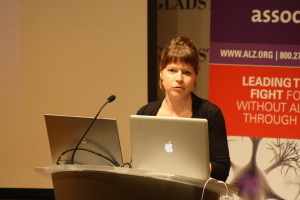 The first presenter was Dr. Miranka Wirth who spoke about neuroimaging biomarkers of Alzheimer’s disease. They hypotheses of this study is that 1.) the people in the early stages of Alzheimer’s with neurodegeneration should be A-beta positive and 2.) Neurodegeneration should be related to preclinical cognitive decline. Her lab measured Alzheimer’s pathology using four biomarkters: A-beta deposition, neuronal dysfunction, and neuronal atrophy (by measuring cortical thickness and hippocampal volume). 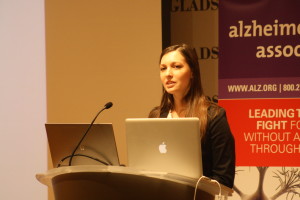 Next was a presentation from Dr. Michelle James who talked about some preliminary data out of her lab on molecular imaging. Molecular imaging could lead to early detection of Alzheimer’s disease and a greater understand of disease mechanisms. We know Alzheimer’s starts before symptoms are evident – which means it’s difficult to treat the disease because there’s already a lot of degeneration once the disease is finally identified. The existing biomarkers for Alzheimer’s have limitations so we need more. Dr. James talked about what an ideal Alzheimer’s biomarker would look like: it would help with early detection; it would be sensitive to and accurate in identifying Alzheimer’s disease specifically; it would enable us to monitor the disease; it would have predictive power; allow for repeated measurements; be non invasive and cost effective; be easy to perform; have a read out that is easy to read and interpret; and should be useful for therapy monitoring. 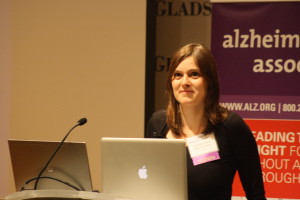 Next session (post-lunch!) will cover research in the area of cellular and molecular neuroscience.