Researchers will be sharing their latest Alzheimer’s research findings with each other, networking and meeting and recognizing the youngest researchers in the field. We’ll be blogging about the innovative work being discussed throughout the day today, so stay tuned for more! 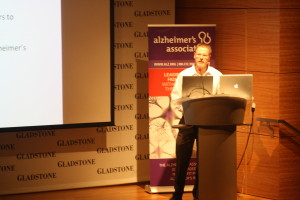 The morning started with a presentation by Dr. Lennart Mucke from the Gladstone Institute of Neurological Disease. He overviewed recommendations from the Alzheimer’s Disease Research Summit 2012. There were several recommendations, including:

He then introduced the first session of the day, which featured studies in the area of clinical and translational neuroscience. 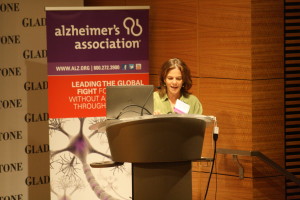 First up was Dr. Kristine Yaffee, who presented about her work on sleep quality and cognitive impairment. She started the conversation by explaining why she and her lab are interested in looking at sleep and cognitive impairment. Many people as they age end up having sleep issues. Though often treatable, sleep disruptions have been shown to have adverse effects on health, such as more falls etc. However, there hasn’t been much research on cognitive outcomes resulting from sleep disruptions. Previous labs have shown a relationship in levels of beta amyloid and wakefulness in mice. 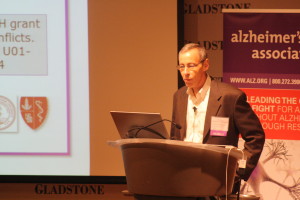 Next, Dr. Victor Henderson presented on his lab’s clinical trial that focused on the effects of isoflavone-rich soy on a group of postmenopausal women. Isoflavones are a compound in soy that is classified as plant estrogen. The existing literature that looks at the effects of isoflavones on the brain is mixed – some suggest benefits, others show harm and still others show no effect at all. In this study, results showed that for healthy older women, isoflavone consumption does not seem to have any effect on cognitive function.

The next session of the symposium will cover research in the area of imaging and biomarkers.