Alzheimer’s Association Advocacy Forum Day 1: Advocacy 101 highlights why public policy is the only way we can reach “all the people” 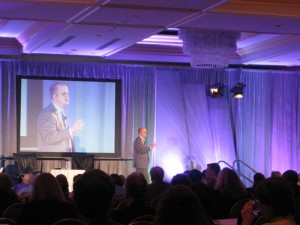 The 2012 Alzheimer’s Association Advocacy Forum has started off on an exciting note: This is the largest Advocacy Forum in the history of the 24 years of the event and the first time ever we have had every single state and the District of Columbia represented! And even more exciting news: 300 of the 700 advocates here today are first-time participants, which just goes to show our movement is growing by leaps and bounds.

The first general session Advocacy 101 focused on these new advocates and giving them more background about why we advocate as well as offered some basic training.

“But that means we are doing a good job but leaving behind 90 percent of the people,” he said. “Public policy – by changing a law or regulation – will help us reach all the people.”

He posed a question: Let’s say we could reach all of the people. Could we meet all of their needs? He likened the burden felt by Alzheimer’s families to pushing a boulder up a hill made steep by little care planning, a lack of services in the community, untrained medical personnel etc.

“Public policy can address all of these things. Even still, Alzheimer’s will be a big burden, but at least with public policy, it can be a much smaller hill.”

He then posed a second questions: Let’s say we could reach all of the people and meet all their needs today. Can we still do it tomorrow?

“This is where America is headed,” he said. “Even if we could reach all of the people all of the time and could meet all of their needs today, the point is that we will have to continue being able to do this as the numbers grow.”

Of the $200 billion it costs to care for people with Alzheimer’s in the country, $140 billion of that is from Medicare and Medicaid. Meanwhile, the government spends $498 million on research into prevention, treatments and a cure.

“For every $100 they spend on research, they spend $28,000 on caring for the disease,” he said. “Somehow this doesn’t seem right, when we’re spending only one penny to avoid spending 280 pennies; that’s why you are here this week. Because we need to change the priorities in Washington, we need to make sure they get their priorities right so that we can reach a world without Alzheimer’s.”

After that dramatic illustration of the problems with Alzheimer’s in this country, the program continued with a mini-training by advocacy guru Stephanie Vance, an author of four books on advocacy with over 20 years of experience in Congressional affairs, including serving as a lobbyist for National Public Radio and as a staffer for an elected official.

“I was basically the person who was advocated at,” she said. “A lot of people would come in and meet with me and after they left, I wasn’t always sure what it was all about.”

She reiterated how difficult it is to get legislation passed by Congress by quizzing the audience:

How many bills are introduced in a two-year congressional session? 10,000.

What percentage get passed? Four percent.

Of the four percent that pass, how many are about changing the names of post offices and other federal buildings? 33 percent.

Her training included an overview of the anatomy of a legislative visit and encouraged advocates to practice the SPIT technique during meetings.

S = Be specific – what do you want and why should the elected official want to support that?

I = Be informative – provide valuable information to back it up

“The number one thing that influences elected officials – and research has shown this – is in person issue visits from constituents; exactly what you’re doing is what works,” she said. “Your goal as an advocate is to take your story and connect it to the stuff that is going on here in DC.”

More to come from the Rally to Remember coming soon! Stay tuned here and at www.alz.org/forum for updates throughout the Alzheimer’s Association Advocacy Forum.