Saturday mornings are a time that I have carved out for me to do whatever I want. Usually, I get up early to attend a Weight Watcher’s meeting and then hit the grocery store or farmer’s market while inspiration for a thinner me is still fresh enough to keep me away from potato chips.

Last Saturday I arrived early, had coffee and a chat with a couple of WW buddies and weighed in. My renewed commitment to take off the pounds I had regained since John’s diagnosis was starting to show progress! To keep the momentum going, I decided to make a special dinner using whole wheat pasta and lots of veggies.

While at the market I got a call from our grandson, Adam. He said that Papa was asking for a hot chocolate. Realizing my “me” time had just been shut down, I said that I would pick up his drink on my way home. I’ll admit that I dragged my feet a bit before heading to the check out counter, but not by much. 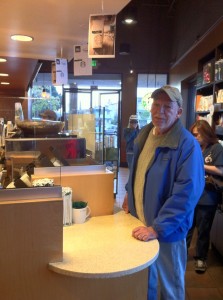 John waits for his hot chocolate at Starbucks

About 20 minutes had passed from the time of the call to my actually loading the car and driving to the Starbucks across the street. Entering the shop I saw John sitting at a table with a man I didn’t know. His face lit up with a smile when he saw me, I glanced around to see which member of the family had brought him.

To my surprise, dismay, horror”¦ I discovered that he was there by himself. Touching his shoulder, I asked if he had already ordered his drink, smiling he nodded yes. I walked over to the pick-up counter and asked Audrey, our regular barista, if anyone had seen John arrive.

She told me that Roxie, one of the workers happened to be getting into her car and had spotted John in the parking lot looking a bit dazed. She used her cell to call inside the shop to let them know that John was outside without me and if he didn’t come in soon to look for him. Roberto was just about to do so when John walked in and ordered his drink.

They decided to let him sit for a while before offering to call me or give him a ride home. 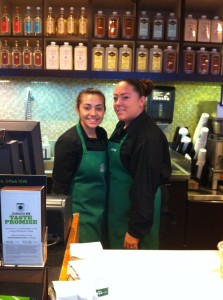 Our regular baristas Roxie and Audrey

I cannot express how grateful I am to know that the staff at our local Starbucks has taken an interest in John. We are regulars, they know of his disease, read my blog and ask about him if he isn’t with me. I laughingly say that I feel I’m with a rock star when he arrives with me: Which has become less and less often. Lately he would rather stay in bed and wait for the hot chocolate to come to him.

John doesn’t understand why I am so upset that he went to get a drink without me. He decided where he wanted to go, walked there, ordered and paid for what he wanted. What’s the problem?

It was luck that I decided to go to Starbucks instead of going home to get him. If I had done that, I would have found John missing and I’m not sure I would have immediately known where he would be. The park would have been my first guess, my mother’s down the street another. Some place a mile and a half away would not have been top of mind.

I have resisted purchasing medic alert bands for us to wear. I know it is stupid to think not having them means not needing them, but there you have it. This latest episode cannot be ignored.  And I have ordered one for each of us.