The Rally to Remember: “If the love of your life is hit with this insidious disease, you cannot stand by and do nothing”

The Rally to Remember started with a poignant live rendition of Imagine by John Lennon that set a somber but hopeful tone for the rest of the evening.

Local Washington, D.C. CBS anchor JC Hayward took the stage to emcee the Rally once again put the Forum and Alzheimer’s Association advocacy into perspective for the room.

“For a moment let us just imagine”¦ a world without Alzheimer’s disease; imagine that this is not just an issue, but a movement unified, demanding change,” she said. “Today we have gathered here because we want to move from imagining these things to actually living them.”

Hayward is no stranger to this disease. About 15 years ago she did a series of special reports on Alzheimer’s disease. Little did she know that her mother would be stricken with the disease. It was an experience that spurred her to action.

“We’re more than dreamers, we’re actually doers. We are living proof that a common purpose can and will create change,” she said. “Today we stand with that common purpose to make AD a national priority.”

The first, Arkansas resident Guy Dallas told a story about going to a birthday party at the age of 14 and meeting a pretty blond girl who he walked home. He was instantly smitten and ended up marrying her just seven years later. Married now for 56 years, she was diagnosed with Alzheimer’s eight years ago; Guy is her sole caregiver.

“If the love of your life is hit with this insidious disease, you cannot stand by and do nothing,” he said. He is a key part of the advocacy efforts in the state of Arkansas and serves as an ambassador to his local Congressman.

Next, Gee Gerke, a volunteer advocate from Maryland took the stage to tell the story about her parents who survived much hardship in Korea, came to the U.S. and lived the American dream. Her father has Alzheimer’s disease. She challenged the advocates in the room to ask one more person to join this cause so that the movement would continue to grow. She talked about how her father has retained his positive disposition even through Alzheimer’s and said she tries to live by his philosophy that even out of bad things come good. 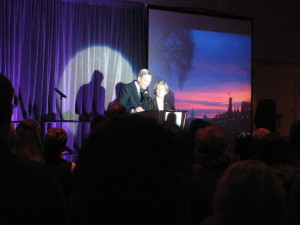 Finally, former Kansas Congressman Dennis Moore and his wife Stephanie Moore took to the stage. Moore served in Congress from 1999 to 2011. The room fell silent when he announced that he was diagnosed with early stage Alzheimer’s just a couple of months ago. He is here at the Forum with his wife because they made a choice. “We knew we could not be silent,” he said.

Theses volunteers were representative of the advocates in the room – spouses, family members, friends, health advocates and people with dementia who have all chosen to speak up on behalf of the Alzheimer’s cause. 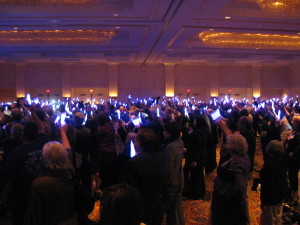 The room recognized and celebrated, closing the Rally with 700 glow sticks raised high, waving in the air in support of the movement.

Stay tuned for more tomorrow, when Forum attendees will hear from several notable keynote speakers including Kathleen Sebelious, secretary of Health and Human Services. Follow more about the Forum at www.alz.org/forum.