On a Personal Note”¦(Bobbie Johnson) 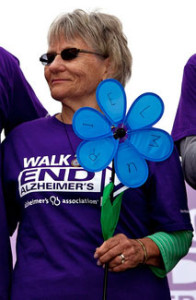 “My husband Coleman and I lived and raised our three children in Livermore, Calif. I had a wonderful career as a Registered Nurse. As part of that career I served several kinds of nursing functions. The last type of nursing was as a nurse in the intensive care unit of a trauma center at Eden Medical Center in Castro Valley. In this function, I was certified as a Neurological Nurse. This meant that I was responsible for the well being of people with brain injuries.

I had other exposure to Alzheimer’s disease with my mother-in-law and others. After I retired in 2001 I slowly began realizing that I was having memory problems. At first, we all attributed it to the normal aging process. However, I was having increased anxiety about this memory loss. When this became more difficult, I contacted my Kaiser doctor to seek some tools to deal with the anxiety. She sent me to Kaiser’s memory clinic in Walnut Creek, Calif.

After the initial screening, I was given a diagnosis of Alzheimer’s disease.

The impact of this on me was enormous. I knew enough about the disease to be shocked. After the initial shock lessened, I received the second big shock: the DMV took my driver’s license away! I am still getting used to this. My loving family has been more supportive than anyone can hope for. My husband calls it “Driving Miss Daisy” when he takes me to things that I used to do for myself. All of our children and older grandchildren have been wonderfully supportive. It was really fun for our nine-year-old grandson, Cole, to teach me to play games on the Wii machine. He was so patient when I didn’t seem to be getting it. I eventually did and enjoyed playing with him. When Coleman went away for a church mission, both local families wanted me to stay with them.

The Alzheimer’s Association has been important to me in that I have been able to meet and get to know others that are going through what I am going through. It is comforting and supportive for me to see other people that are functioning well with Alzheimer’s and they tell me about how they are doing it. The support groups, the Champions program and the opportunity to be at Walk to End Alzheimer’s are all advantages of being involved with the Association.

What I think is more important to me is the opportunity to work with the advancement of understanding of the disease. I have had the opportunity to invite our friend Judy [Alzheimer’s Association staff] to our church to provide information to people that might want to know about early diagnosis. I introduced myself as having been diagnosed with Alzheimer’s to illustrate that there are many of us that are completely functioning in our community with Alzheimer’s. I have also become part of a clinical study to seek early physical markers for the disease. In short, I want to “make lemonade out of lemons” and gain some good from my case for the future.

The things that are important to me are coping, helping others cope and helping for the future. The Alzheimer’s Association is a key instrument for me to achieve all of these and I am proud to be part of it.”