Michael was a First Lieutenant in the Army and served in the Cold War and Operation Desert Storm. His younger sister and brother are retired field-grade officers in the Air Force and his nephew is on active duty in the Army.

While this family is used to facing tough opponents, they have found a new enemy. In 2012, Michael’s father, Nicolas Mendoza, was diagnosed with dementia.

Many of the over 5.7 million Americans living with Alzheimer’s and other dementias are veterans. Some veterans are at increased risk for the disease due to traumatic brain injury, posttraumatic stress disorder (PTSD) and/or other service-related injuries. Many caregivers, such as Michael and his younger siblings, have also served.

A history of PTSD
Nicolas Mendoza was born in the Philippines and joined the U.S. Army in 1953. He and his family settled in Hawaii. 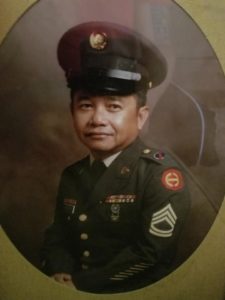 Nicolas experienced PTSD as a result of his service. Michael’s mom, Veneranda, recognized that her husband wasn’t acting like himself.

Michael remembers his father waking up with nightmares.

They were living in Mililanii-Waipio at the time. Michael’s father sought mental health treatment to help him cope with the PTSD.

Dad is becoming forgetful
In 2012, Veneranda need to have surgery. Michael went home to Hawaii to help care for his mother during her recovery.

During his visit, Michael noticed that Nicolas wasn’t himself. When he asked his mom if she had noticed anything, she mentioned that Nicolas had become very forgetful.

Michael took the initiative to call and meet with his father’s primary care physician. When he shared his concerns, he learned that the doctor had started to be concerned about Nicolas’ cognitive health in 2010 but had not made a diagnosis. Michael had to return to California before he could take his father to the doctor.

Michael’s younger brother, Maynard, was in the Air Force at the time. He was to be assigned at Hickam AFB in Hawaii. Michael updated Maynard and asked him to help.

The brothers stayed in frequent contact. Maynard helped his father follow through with his medical appointments. In 2012, Nicolas was diagnosed with dementia.

The benefits of advance planning
When Michael’s mom was having surgery, Michael and his siblings pushed to create their legal and financial plans, in case anything happened to either parent. Veneranda was reluctant at first, so it was challenging.

They worked with an attorney to set everything up. It took three years to get everything in place. This planning paid off after Veneranda died in 2014 and the siblings had to take over Nicolas’ care. 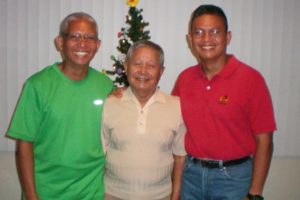 Nicolas and his sons

One of Maynard’s former college classmates works for the VA in Hawaii. He has also given them tips to navigate the system.

Nicolas receives his medical care through TRICARE. They have used VA care and support services for those with dementia and their caregivers.

Nicolas’ primary care physician suggested that they also reach out to the Alzheimer’s Association for additional support. The physician’s mother had died from Alzheimer’s disease. With personal experience as a caregiver, she knew how stressful it could be.

Coming together to celebrate Dad
Michael last visited his father in September for Nicolas’ 90th birthday. He hadn’t been home since 2016. Nicolas’ children and their families came from across the country.

“At my last visit, my father had no idea who I was, nor my wife or children,” shared Michael. “It’s heartbreaking.”

Nicolas is currently living in a small residential care community in Wahiawa. Maynard has retired from the military and is going to bring his father back to their family home. He will hire caregivers to help him.

Michael goes home twice a year for a few weeks to help his brother out. His sister also travels from Washington, D.C., to Hawaii to provide care and assist Maynard.

Pride in service
Michael left Hawaii at 18 to attend the University of San Francisco. That’s where he received his commission as a Second Lieutenant.

Michael’s father was very proud when his son joined the military. “I can still see his face as he and my mother pinned my Second Lieutenant bars on me,” said Michael. “They pinned the bars on each of my siblings who served.”

Walking for Dad
When Michael saw a Facebook ad for the East Bay Walk to End Alzheimer’s, he immediately signed up to participate. “I hate to see family members go through this,” shared Michael. “When it happens to a family member, it really hits home.” 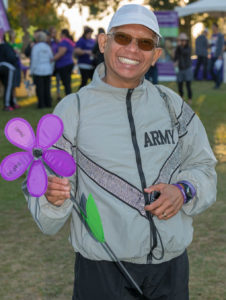 Michael at Walk to End Alzheimers

Michael’s father-in-law and mother-in-law both died from Alzheimer’s disease in 2003 and 2016, respectively. His family didn’t know about the services of the Alzheimer’s Association at that time.

Michael and his wife, Lourdes, helped pay for her parents’ care.  His wife’s parents received medical benefits from Medicare and Medi-Cal, which were limited.

Michael walked in his Army Physical Fitness Uniform, representing him and his dad, as Army veterans. “I’m walking for my dad,” said Michael. “I’m also walking in memory of my mother-in-law and father-in-law.”

Caregiving challenges
While two-thirds of caregivers are women, there are many men such as Maynard and Michael, who provide care for a loved one. They help with daily activities, such as bathing and feeding.

As a long-distance caregiver who owns two small businesses, Michael acknowledges that making the time to visit his father can be challenging. In February, Michael had a shoulder injury and wasn’t able to travel.

The financial costs of travel are also a challenge. The airfare to Hawaii and expenses to visit can be costly. Michael wishes that he could see his father more often.

Michael appreciates the time he has with his father. “Even though my dad doesn’t know me, the fact that I’m there is what is important,” shared Michael. “I don’t care whether I’m bathing, feeding or dressing him. What is important is that I am there with him. I hug him and let him know that I love him.”

Editor’s note: Nicolas passed away at his home, while under hospice care, on December 5, 2018.