A son shares how he has changed as he has cared for his mom, who is living with Alzheimer’s.

Neal Ahern of Guerneville was in his early 30s when he was thrust into caregiving for his mom, Sandra. She had been diagnosed with Alzheimer’s disease and was lacking financial resources. His twin sister, Catherine, has also been a caregiver for Sandra, managing her medical care. Recently, Neal wrote about his caregiving journey and how his perspective has changed over the past eight years. We appreciate Neal’s generosity in letting us share his story with you.

The Alzheimer’s Tsunami is Coming: Spending my 30’s riding my mom’s wave, plenty of wipeouts but never fell off
By Neal Ahern

My mom, who is currently under hospice care at her nursing home with very advanced Alzheimer’s, esophageal cancer, and a broken hip from a recent fall, had become my full-time responsibility some time in my early 30’s. I am 39 now. 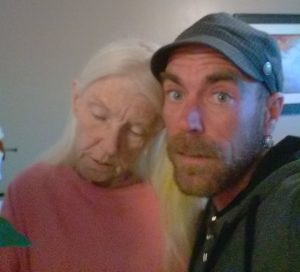 When I first was inspired to write this, my intention was to compose a rather scathing wakeup call to my peers and everyone else who has a loved one stricken with this disease. But especially the children, because that is the perspective and experience I am coming from and know the best. Happily, that tone has mellowed. Shaming/overwhelming people into change/action is definitely counterproductive when the goal is to communicate.

Here’s a little bit of my journey with Alzheimer’s: just a few of the things I had to alter within my own relationship to what “I thought my life was supposed to be” to survive.

In my experience as a caregiver and as a regular participant in support groups for caregivers provided by the Alzheimer’s Association, I have come to the conclusion that there is no easy version of how this disease incorporates itself into anyone’s life. I also recognize there are no shortages of crises occurring in our communities, be it local or global. Alzheimer’s is very local, residing inside most peoples’ most inner circles. Its’ the original ripple in a lake of ripples. 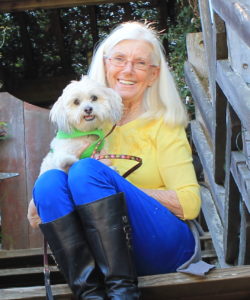 Sandra, sitting on the steps at her old home

My mom was born in 1947, year two of the baby boomer generation. She is the oldest of seven siblings. She was diagnosed with Alzheimer’s disease the same week my twin sister had a stroke and was rendered paralyzed on her entire right side.

While in Seattle, encouraging my sister to learn to walk again, my mom’s husband informed me of my mom’s diagnosis. He also letting me know they were running out of money: they had about three months left of rent.

His only idea was that they move in with me in California. At the time I didn’t have a house, as the one I had been renting had just gone into foreclosure. It took me several days and quite a few drinks before I could talk myself into this scenario. And that is being completely honest. I guess my survival instinct, and definitely my closest friends, were telling me not to do it. They also had my best interest at heart; that’s part of what makes them great friends.

It began as a slow erosion of control over the independence my life formerly provided: my job, my privacy, my life savings, my future, my mom as my best friend and the person I called every day to check in with as my trusted confidant. Eventually it snowballed into a depth of depression, anxiety and absolute confusion as to the why and what my life had become. Being in this mental space came very close to costing me my life.

I strived at first to hold on to some components of my old life, until holding on to those things began getting in the way of extending compassion and love to my mom. They became mutually exclusive. When doing the right thing is also knowingly having serious impacts on your life – the same impacts that inspire some gamblers, drunks and drug addicts to go to rehab – it can be a very confusing place to be.

In no way was I doing this alone either. I had help from my sister, brother, dad, the state of California, the Alzheimer’s Association, the homeless and business owners in Guerneville, and support from many amazing friends whenever I needed it. Frankly, it never seemed enough. It’s a burden to be shared both economically, physically and emotionally. It’s nearly impossible to focus more than 50 percent on one person, independent of how valuable we perceive our time, our life, or the families we made vs. the families that made us.

Standing from my current perspective and looking back, I can share a sense of serenity from letting go of all the details of my life that I found important when this journey began. Ironically it comes at a time when I could begin to pursue them all again. In all honesty, none of those things matter to me anymore. Those details now seem foreign to me, as if they were part of some other person’s life

I believe this disease, along with the multitudes of other forms of dementia, is going to run rampant through our society over the next 20 years. I worry that perhaps the messages we have internalized from living in this country will leave most of us woefully unprepared to recalibrate our lives around caregiving for our parents. As if somehow it is their fault – because it absolutely is not their fault. And if they have planned enough to not present a financial burden, they will still need to feel loved and not forgotten.

There is a lot of shame that comes with being diagnosed with dementia that could be mitigated to some extent with a conversation, letting your parents and loved ones know that you have their back should they be so unlucky to get the diagnosis or simply begin to feel like their memory is slipping. Dropping any statements that start with “do you remember when” is probably a good practice to get in now. There are other ways to talk about the past. 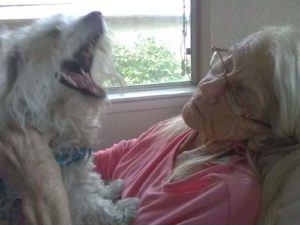 I have spent most of the last three weeks at my mom’s nursing home either at her bedside or handing our hugs and “I love you’s” to the staff and other residents. It’s not because I think I am the greatest person ever, but because it is what the situation requires. The residents are mostly forgotten people who feel forgotten. I’m pretty sure we visit animal shelters (but without the intent to adopt a new pet) more frequently than nursing homes. “Thanks, I really needed that,” is the most common response I get from the hugs. It’s impossible now for me to be in my mom’s facility and not act with utter kindness and compassion. It’s almost as if it is out of my control.

Instead of becoming the world’s most bitter person, untrusting and feeling like most people are manipulative and self-centered, I made the choice to forgive everyone I thought should have done more than they did. Holding onto the impact of others’ decisions on my own life was making me resent everything and mostly everyone. And that is just not my nature. I gave this disease everything I had to give and then I gave it some more. What I have begun to get back means more to me than anything I gave up. I have gained self-knowledge of what is actually important to me: love, compassion, trust and forgiveness.

As my reserve tanks of caregiving capacity slowly refill, it has become clear to me that supporting other caregivers on their own journeys will be a major focus of my life going forward. It is the experience I know the most intimately. There are no perfect caregivers, no manual on how to do it “right,” just people rallying for their families however they can. This is the glue, as I see it, that holds us all together as human beings. I am here for all of you now. The experience of letting go of the aspects of my life I previously defined as important to me has made me a better version of myself. I am here now, in whatever way I can be of use.