These two high school students are part of the movement to end Alzheimer’s.

Aryan Govil: One volunteer opportunity led to another
Experience volunteering at a memory care community inspired this high school sophomore from San Ramon. “When I volunteered, I realized that Alzheimer’s disease is a growing problem,” said Aryan. “I wanted to do something more.”

Sharing his passion for music with others 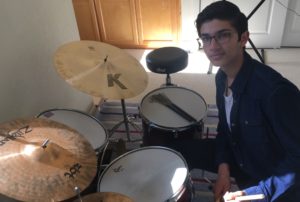 Aryan has been playing drums for eight years and is a member of the Dougherty Valley High School jazz band. He decided to offer drum lessons and donate the funds raised to the Alzheimer’s Association.

To recruit students, Aryan put out an ad offering lessons. People quickly responded. He has been teaching several fourth and fifth graders for the past year.

More support than he expected
Aryan started with a $100 goal, but quickly had to increase it. So far he has raised over $3,600 for The Longest Day. The funds support Alzheimer’s research, along with care and support programs in the community.

Aryan was surprised when people started giving more than he asked for the lessons. Others who heard about his fundraiser also made donations. It helped him see how many people care about this issue.

If researchers are not able to find a way to slow or stop Alzheimer’s, by 2050 close to 14 million in the United States will be living with Alzheimer’s. Aryan believes that it’s important for his generation to get involved. “If we don’t fix it now, it’s going to become a huge worldwide problem,” notes Aryan.

Lesley Carrillo: Inspired by a teacher
A senior at Sierra High School in Manteca, Lesley Carrillo, is President of Community Leaders of America (CLA). Through CLA, the club members participate in activities to give back to their community.

Club advisor, Jared Rio, suggested that the students support the Alzheimer’s Association through having a team for the Modesto Walk to End Alzheimer’s. While nobody in Lesley’s family has had Alzheimer’s disease, several others in the club knew someone. The students also learned that the disease is affecting many families in their community.

Bringing the school and community together 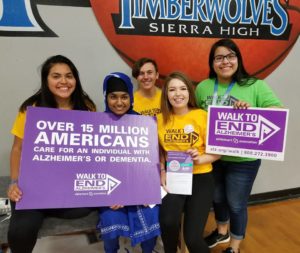 Lesley (in green shirt) with other CLA members

CLA members like to put on events and invite others to participate. For their Walk fundraiser, they hosted a “Moms, Dads and Grads Craft Fair.” They invited arts and craft vendors to have a table and 50 vendors from all over the region signed up.

Other student groups participated, such as Future Farmers of America, who sold lunches. CLA members advertised the event throughout the community, newspapers, and on social media, encouraging people to come find the perfect gift.

Raising funds and awareness
Their event posters included statistics on Alzheimer’s and other dementias. Students included representatives from the Alzheimer’s Association, who staffed a resource table at the craft fair.

Lesley and her fellow club members raised over $1,500 for the Alzheimer’s Association from vendor booth fees and other donations.

Connecting with others
At the craft fair, Lesley met people who’d had parents with Alzheimer’s. They shared with her what a difficult experience it had been. It reminded Lesley of her own grandmother, who had brain cancer. There were times when she had trouble recognizing Lesley or wasn’t able to say her granddaughter’s name.

Lesley shared that “high school is a great time to try new things and discover what you’re passionate about.” The CLA members are clearly passionate about supporting others within their community.

Seven tips from Lesley and Aryan
Lesley and Aryan shared their suggestions for other high school students who might be thinking about supporting the Alzheimer’s Association.

Aryan and Leslie both plan to pursue careers in the medical field. Leslie will be starting at UC Davis in the fall and wants to be a doctor (possibly a neurologist). Aryan plans to be medical researcher in the field of neurology. Who knows – maybe someday you’ll read about them again as recipients of an Alzheimer’s Association research grant.

If you’re interested in participating in The Longest Day or the Walk to End Alzheimer’s, you can sign up online or call 800.272.3900 for more information. We also have volunteer opportunities for students.