Why I Walk: Josslyn Jones 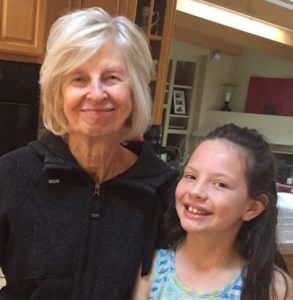 11-year old Josslyn Jones is walking in the San Francisco Walk to End Alzheimer’s in honor of her Grandma, who was diagnosed a few years ago with Alzheimer’s disease. Josslyn caught our attention when she sent us this email:

My name is Josslyn Jones and I’m 11 years old. My grandma was diagnosed with Alzheimer’s disease a few years ago. My school in San Francisco recently held a film festival where students could enter short films on different subjects. I made a film about my grandma and how I participate in the Walk to Remember to raise awareness and money to find a cure.

My film, A Promise For My Grandma, won in the making a difference category. I received a trophy and $250 that I would like to donate to the Alzheimers association in honor of my grandma. My mom said that I should let you know in case you have a place to show support from kids. Please let me know if there is more I can do to help.

Moved and inspired by this young lady, we asked if she’d talk to us about her relationship with her Grandma, and why she is so devoted to finding a cure for Alzheimer’s.

“I love her dearly,” says Josslyn, who has always had a close relationship with her grandmother. “I’d put makeup on her when I was little. I was NOT the best at that.” Growing up, she and her sister looked forward to visiting often with their grandparents, who lived in Los Angeles before her grandmother’s diagnosis.

After her diagnosis, Josslyn’s grandmother moved from Los Angeles to a care facility nearby in San Francisco. Now, according to Josslyn, she and her family “get to visit her every weekend.” Her grandfather moved up too, and Josslyn says “We can all go have dinner together and it’s really nice.”

Josslyn talked about her sadness around her grandmother’s declining memory, but says. “In my heart I know she still remembers me.”

On September 10th, Josslyn will be at the San Francisco Walk to End Alzheimer’s for the 3rd year in a row, accompanied by her Mom, Dad, and 7-year old sister. She says her favorite part of the Walk is the promise flower ceremony.

“My walk experience is really fun. Whenever I get tired, I tell myself I’m walking for my grandma.”  She wants to raise the most amount of money she can to help her grandma. “I don’t want people to suffer from Alzheimer’s, because I know it’s a terrible disease.”

Josslyn, we can’t wait to see you on September 10th!