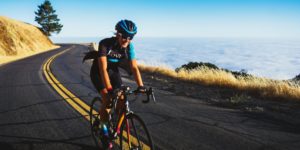 “If there is a cause you care about, just do it. You will be surprised by how generous and supportive people want to be.” That’s the advice of Alice Walton, who participated in the Mt. Tam Double Century in Marin, CA as part of The Longest Day. The Longest Day is a fundraising event honoring loved ones affected with Alzheimer’s disease by doing what you love.

Alice participated in support of her family, who has been hit close to home by Alzheimer’s. She wanted her first long ride to really have an impact, and for 13 hours she rode through Marin and Sonoma in order to bring about awareness and raise funds for Alzheimer’s. Her most memorable moment of the ride wasn’t the ride itself, but the support she received from all the donations and well wishes. “I initially put off the fundraising portion, as I felt vulnerable asking for money, but this was a special cause to me and I felt continuously supported and surprised by the donations.”

Kelly and her father Bob took on a similar challenge by riding in the RAGBRAI, a 440 mile ride for seven days in Iowa, in honor of Bob’s mother Virgie who passed away from Alzheimer’s. Virgie was one of five siblings who has battled with Alzheimer’s. “We have really seen it repeatedly across generations,” Kelly said. “You see how it comes across and strips everyone of who they are. Family was the center of everything for her, it was hard to see her not remember her own kids.” 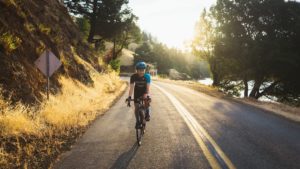 Bob grew up in Iowa and the race had always been on his bucket list. Kelly and Bob have raised over $11,000 through their fundraising efforts. One successful strategy was personalizing their story and using social media to send daily updates to everyone about their ride. They received positive responses as people would share their personal struggles with the disease along with their donations. “We will definitely do it again,” Kelly says. “it was a great combination of a fundraiser and sharing in this special place my grandmother had been.”

These two cycling teams took on a challenge, riding more than 600 miles and raising more than $15,000. There is still time to donate to the The Longest Day. Together, we have raised funds and awareness for care and support while advancing research toward the first survivor of Alzheimer’s.