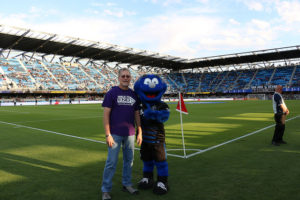 In 2011, life changed drastically for Dale Friesen when he was diagnosed with younger onset Alzheimer’s disease at the age of 57. Dale describes feeling hopeless at first, but then decided he wanted to join the fight against Alzheimer’s. And on Saturday June 25th, at the San Jose Earthquakes game, Dale kicked off the Silicon Valley Walk to End Alzheimer’s “Alz Awareness Night” by making the ceremonial first goal. He was joined by his wife Julie, son Ethan, and best friend Darrell.

A sold out crowd was in attendance, including 125 Walk team captains. Thanks to Amazon’s sponsorship and the Earthquakes’s donation from the evening’s raffle, this was the most successful kick-off event for the Silicon Valley Walk. Thousands of people came by to show their support and learn more about Alzheimer’s and the upcoming walk.

“I want to participate and help in any way I can,” Dale said. He currently attends a support group and art program offered by the Alzheimer’s Association. Dale is excited to be channeling his artistic talents in new directions and hopes to create more thought-provoking art in the future. One takeaway Dale would like everyone to share from the event is “You can’t wait for someone else to do this. Put this in their face!”

Dale is a team captain for the Silicon Valley Walk to End Alzheimer’s. He, along with the other team captains, would like to invite you to join the fight and help put an end to this terrible disease by walking with him on October 14th. Register today at alz.org/walk.