A message from my dad Rick, who finds inspiration from all of the research coming out of the Alzheimer’s Association International Conference:

The Alzheimer’s Association International Conference on Alzheimer’s Disease 2012 (AAIC), the world’s leading forum on dementia research, just came to a close. I had the pleasure of attending this impressive conference a few years ago when it was held in Chicago. Why would someone like me, not at all associated with the world of medical research, want to attend such a conference or even care about the outcomes? 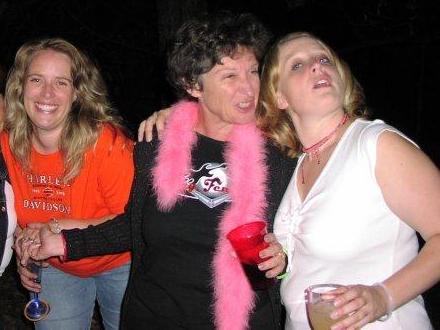 Suzie and the girls

Simple: I have two lovely, talented and extremely capable daughters who can never go for a month without worrying or being concerned about whether one of them will contract this disease.

They have just reached or will soon reach the age of 40 and that is not too far from the age of their mother when we first started to notice symptoms of her decline into the dark and dismal world that is Alzheimer’s. My wife Suzie was only 51 years old when we first received her diagnosis; she died from the disease 10 years later at age 61. She attended her oldest daughter’s wedding, but didn’t really seem to understand what was happening. She never saw her grandchildren. I was reminded by my daughter recently at a family gathering that the possibility of Alzheimer’s in her life is always present in her thoughts. She said to me “When I reach 50, you will be 75 and we should throw a really big party for both of us”¦ if I don’t have Alzheimer’s!” How sad and how frightening is that?

Several years ago, in the middle of my wife’s decline into the despair of Alzheimer’s, our family sought help and knowledge from the Alzheimer’s Association. The first thing we did was form a team (the Pepperpeds) and walk in the San Francisco Memory Walk; we continue to walk in the San Francisco Walk to End Alzheimer’s. Suzie is still in our thoughts, and while she only walked the first few years, she is always with us when we join thousands of other families to show our solidarity and support for the mission and our cause.

This year we once again will sponsor our walk team and also hold the 24th Annual Smith Ranch Chili Cook-off and Music Festival at the Mountain House Bar in Tracy, California on Saturday, August 18 from noon to 9 p.m. All the proceeds will go to the Walk to End Alzheimer’s.

We also will watch carefully for breaking news and hope from the conference in Vancouver and every year hereafter until we find a cure. Why? Because I want more than anything to join my healthy and capable daughters for their 50th birthdays without the worry of Alzheimer’s. I want it for my family and all families who may be living with the same grim reality of this deadly disease.