Why I Walk: Frank’s Story 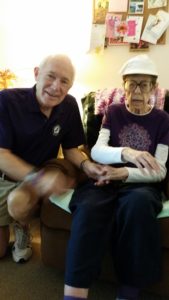 Frank Wolfe is participating in the Sacramento Walk to End Alzheimer’s in honor of the loved ones he’s lost to the disease. But it is his fundraising challenge that has people talking. If he raises $5,000, he will do 5,000 push-ups. Read Frank’s story below.

Why did you get involved with Walk?

The reason why I got involved with Walk is because on February 4, 2006, my wife Judith was diagnosed with Alzheimer’s. I was her caregiver for seven years and on February 4, 2013, she became a resident in the Memory Care unit at Eskaton Fountainwood Lodge in Orangevale. I did what I could and I really wanted to take care of her because my mother had taken care of my father until he died. But the difference was she was twelve years younger than him, and I was three years older than Judy.

I made it a purpose to go and visit her as often as I could and initially, I’d go and have dinner with her there every night, when she was well enough for us to go in the main dining room. I am sure every other caregiver will tell you that the hardest thing as you ended your visit each evening was to tuck your wife or spouse in bed, kiss her, say “I love you”, and walk out the door without crying. That usually came later in the hallway.

This disease is so horrible. We need to defeat it. And that is why I walk!

How did you come up with the 5,000 push-ups challenge idea? 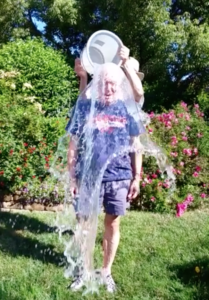 I first heard about the Walk to End Alzheimer’s in 2013 and that’s when I started walking. Last year I was able to raise $4,500. Shortly before this my son had done the ALS Ice Bucket Challenge and he passed it on to me. I did the challenge to raise funds and awareness not only for ALS but Alzheimer’s disease, also.

Coming from a lifetime of sales, I don’t go backwards so I said “Well, I gotta shoot for $5,000 this year.” Then I remembered that in the military, they would punish with “drop and give me twenty”. So I decided I can do five thousand push-ups. Not all at once, but 25 per day for 200 days.

In addition to fundraising for the Alzheimer’s Association, we also established a scholarship in honor of my wife. The Judith R. (Waldeck) Wolfe Endowment in Teacher Education Scholarship awards scholarships to graduate students in the College of Education at Sacramento State University. We’ve awarded over $11,000 so far.

Do you have any advice for others who are going through a similar experience?

Remember you can’t do everything and don’t be like me and be hard on yourself. I still carry guilt, even though I know I did a great job. Everybody tells me that, I’m the only one who doesn’t believe it. It’s part of it, you just have to do what you can and love them. And get in a support group.