A Young Volunteer Shares His Story 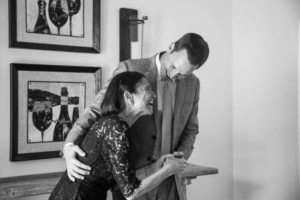 According to the Alzheimer’s Association 2016 Facts & Figures, out of the 5.4 million Americans who have the disease 200,000 are with young onset Alzheimer’s. While the numbers are quite staggering, putting a face behind them truly shows the devastating impact Alzheimer’s disease has on families.

34-year-old Chris Reynolds moved to San Francisco from Nashville, Tennessee in 2011. He is this year’s Co-Chair for the San Francisco Walk to End Alzheimer’s and is also chairing the sponsorship sub-committee. Chris’s mother was diagnosed with early onset Alzheimer’s nine years ago at the age of 53.

What have you learned from your experience with Alzheimer’s disease?
Well I’ve learned how terrible this disease is, for one. I’ve seen how it’s so much more than just memory loss. I’ve learned how tough and loyal my father is, and I think anyone who understands what he does day in, day out for my mother would be amazed at his resolve, patience and positivity. I’ve seen how strong my brother is and been touched by how much he does for my mom and, more importantly, to help my dad.

Do you have any advice for others who are in a similar situation?
My advice would be to start getting as many videos as possible once you learn a loved one has Alzheimer’s. Get them to tell stories and film as much as you can. That’s one of the things we didn’t do that I regret every day. I’d also say don’t tell yourself you have time to do things with your parent or grandparent that may be dealing with the disease. Do what you can to spend as much time with them as possible. They’ll be gone before you know it.

What made you volunteer at the Alzheimer’s Association?
My sister and her fiancÃ© were volunteering for the DC Walk and I was inspired by what they were doing.

Do you think that young people have a good understanding of Alzheimer’s disease and its impact?
I do not. People who deal with this disease in some form usually do, but people who do not seem to think it’s an old person disease or it’s this cute form of memory loss. People I speak to who have no exposure to the disease are shocked when they hear that my mom, who just turned 62, can’t speak to me, much less remember who I am. They don’t understand that she needs 24/7 care or will soon no longer be able to walk.

How can younger generations get involved in the fight to end the disease?
They can help us raise money! They can walk or volunteer to be on the committee. I think the walk is the most important event for people to get involved with, because it’s such a great way to spread awareness about the disease and raises a ton of money.