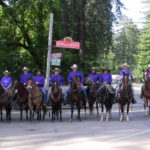 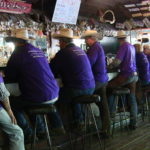 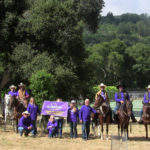 Kim Mardesich participated in The Longest Day along with a group of more than 50 people who rode horses throughout the Bay Area, and walked around downtown Palo Alto on June 20th to raise awareness about Alzheimer’s disease.

Why are you participating in The Longest Day? 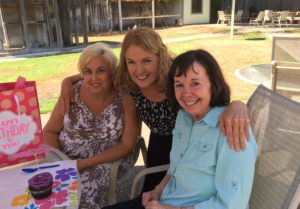 I’ve known my friend Sharon for over 10 years, first as an acquaintance at our children’s high school, but second as a great friend shortly before she was diagnosed with Alzheimer’s Disease. Sharon was having a difficult time at the end of 2008 and the beginning of 2009.  She was summoned for jury duty and was talking to me daily, afraid of “getting lost” when she reported for duty.  I told her I would drive her there and stay with her, but I thought at the time she had agoraphobia.

She and I were very close through that year, but what I perceived to be her agoraphobia became worse.  By the time I was diagnosed with breast cancer in early 2010, it was clear that something else was terribly wrong, and shortly thereafter, her husband told me of her diagnosis. At that point I was confused and angry, and dealing with my own cancer treatment, but I felt LUCKY I had a chance, when I knew she did not.

She became as important to me as I hope I was to her.  My friend Ruth Morgan and I made a pact to see her every two weeks. It began with taking her shopping and out to lunch at a restaurant. Then it became taking her to In-and-Out Burger because it was less confusing for her. Then it became bringing her to my house for a small lunch. Being with her made me realize how very lucky I was with *just* my cancer diagnosis.

She’s been in the care facility for almost three years now, and I keep watching her slip away. On my last visit a couple of weeks ago, I got her back for a few minutes as we looked at pictures of her one-year-old granddaughter, and put her favorite candy into her mouth. I put my arm around her and walked with her for a bit, kissed her and told her I loved her. She looked at me, this woman who has had early onset Alzheimer’s disease for about 8 years and said, “I love you too.”

THAT’S why I am participating in the Longest Day. It’s also why I became an Advocate this spring, and it’s why I am determined to make people understand that Alzheimer’s is an absolute death sentence at the moment and we MUST change that. We MUST.

What did your team do on The Longest Day?

The idea behind our team activity was created and directed by our captain Kerry DeBenedetti. A large group of us carried purple streamers in a wave formation with Alzheimer’s Association balloons, signs, t-shirts and the like through downtown Palo Alto and over to Congresswoman Anna Eshoo’s office. In front of her office, we were joined by members of her staff, including her legislative director. We thanked Congresswoman Eshoo for her support of the HOPE and PCHETA acts and her ongoing work in Congress regarding Alzheimer’s disease. Our goal was to create community awareness around patient and caregiver education, and the need for specific government funding for research to diagnose, treat and cure Alzheimer’s disease and other related dementias.

How many people are on your team and how have they been affected by Alzheimer’s disease?

While we expected about 35-40 people, we actually had more people involved across our friends and relative bases.  Here’s a small sampling of what came up during our get together for this event: My best friend lost her father to a related dementia over 10 years ago. She is walking with us. My mother-in-law is also attending the event, and is presently caring for her 95-year-old lifetime friend who is in hospice with Alzheimer’s disease. My brother-in-law’s mother was diagnosed with Alzheimer’s disease last month. The owner of my physical therapy group told me that his father is in the late stages of the disease. My manicurist told me her uncle died two years ago from young onset Alzheimer’s. And that’s just the people who have come forward. It’s obvious that this affects so many more people than we ever realize.