Memories In The Makingâ„¢ Gallery Of Art

Friday evening, the 13th Annual Memories in the Making Art and Wine Auction took place at the Computer History Museum in Mountain View. The beautiful art that was auctioned off was created by people who live with Alzheimer’s disease. Their art is a tangible means of expression that speaks to their families, their professional caregivers, and to the public. We’ve featured some of the pieces below, along with biographical sketches of the artists.

The inspirational and successful evening raised funds for the Alzheimer’s Association’s mission of eliminating Alzheimer’s disease through the advancement of research; providing and enhancing care and support for all affected; and reducing the risk of dementia through the promotion of brain health. 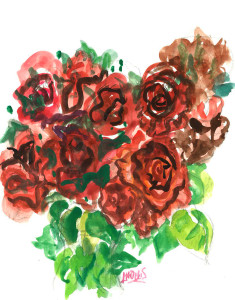 Lily’s painting, Bouquet, was chosen as the signature piece setting the theme for the 2016 Memories in the Making Art & Wine Auction.

Her art abilities are formidable:  She has a fine arts degree and worked as a layout artist at Macy’s for 35 years.  Lily painted and drew many of the “Painted Ladies” of San Francisco, and would take off on solo painting trips along the Coast and into the gold country of California.

Lily has come full circle and continues to create masterpieces in the Memories in the Making watercolor group at Aegis of San Francisco. 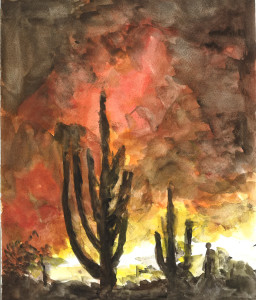 Bill is truly a Renaissance man.  He sang at Carnegie Hall, he completed a graduate degree at age 72 in Art History at UC Berkeley, and he paints in the Memories in the Making group at Catholic Charities Adult Day Services in San Carlos.

Bill was born in San Francisco and has 3 adult children, 1 grandson and 1 great grandson. He is a dedicated Giants fan and enjoys a rousing game of dominos.

Rooster by Jean A.

Her life centers around her family and her love of the arts.  She was also a composer and a church organist. She loves to listen to piano music, and only wishes she could have learned to play the drums.

Jean loves the opportunity to make art in the Memories in the Making group at Aegis Living of Pleasant Hill. She is a prolific painter and has an astute eye for color and composition. 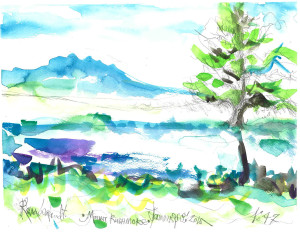 Robert was born in New York. He spent 4 years in the U.S. Navy as a draftsman, and afterwards received a BFA from the Art Institute of Chicago and a Master’s degree from California State University at Los Angeles.

Robert was a professor at Dominican College in New York and keeps his art skills sharp in the Memories in the Making group offered at the VA in Menlo Park. 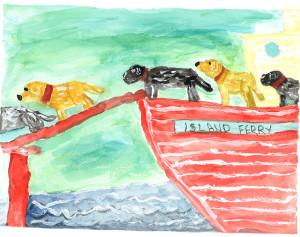 Margaret was from Palo Alto, worked as a nurse tech at Valley Medical Center, and volunteered for years at the San Jose Airport and the Santa Clara Senior Center. She had 3 adult children and numerous grand and great grandchildren.

She was the social butterfly at Pacific Gardens. Margaret’s sense of humor came out when she took part in the Memories in the Making watercolor group. Sadly, Margaret passed away recently. Her spirit will be missed.

Basket of Flowers by Lily H. 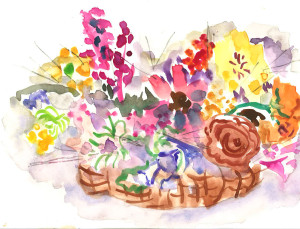 Lily’s life has been one adventure after another. She was born in Germany and came to the United States in 1927 at the age of 3.  She completed her fine arts degree in Ohio and, following the call of the Rosie the Riveter posters, helped produce munitions for the war effort.

In 1954, Lily drove solo across the country, in her Studebaker, to San Francisco. She quickly found the artists and beatniks in North Beach.

She met and married her husband and they embarked on a European sojourn lasting more than 2 years. Lily has a son, a daughter-in-law, and one granddaughter who are devoted to her care. 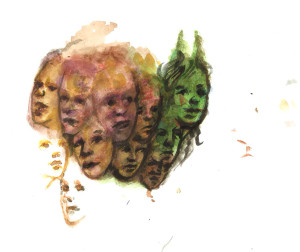 Chikara was born in rural Stockton and raised in Half Moon Bay.  He has 3 sons and 1 daughter.

When WWII hit, he and his family were interned at Topaz War Relocation Camp in Utah. After the war, Chikara worked as an artist for 48 years for the U.S. Army designing recruitment posters.

He enjoys outings to the ocean, playing bingo, and painting in the Memories in the Making group at Gordon Manor. 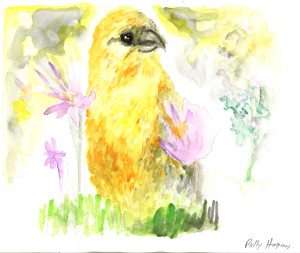 Polly is from the San Francisco Bay Area. She has 3 children, 5 grandchildren and 5 great grandchildren. Polly was a school librarian and has had her art published.

She enjoys outings to the zoo, botanical gardens, and museums.

Polly has contributed many paintings to the Memories in the Making Auction, helping us further the mission of the Alzheimer’s Association.