We are the “Brew Crew for Alzheimer’s” 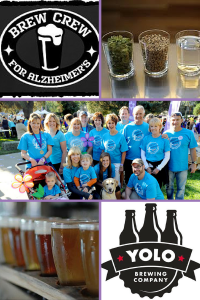 I became involved with the Sacramento Walk To End Alzheimer’s twelve years ago. My motivation? The day former President Ronald Regan passed away. I formed the walk team “Kelly’s Heroes” in memory of my Grandfather, Paul Lamoure, who passed away with Alzheimer’s. When I first set out to educate myself about the disease I was astonished by how many people did not fully understand what Alzheimer’s disease was. This is when I took the the challenge from fellow Alzheimer’s Champion, and my inspiration, Maria Shriver… I decided to be a VOICE. I would help create awareness, and make Alzheimer’s “Top-of-Mind”. We are proud to be included in the Champions Club and frequent “Top Friends & Family” fundraisers!

This is my first “Longest Day” event and I wanted to make it something that friends would love to do…make beer! As a lifestyle blogger for California Craft Beer & California Wineries (sippedincalifornia.com), I have been wanting to develop an event around creating a craft beer for Alzheimer’s. We will be creating our own labels and naming our brew all in the name of Alzheimer’s Awareness – and that’s what this day is all about – creating awareness!

We are the “Brew Crew for Alzheimer’s” and will be brewing under the guiding hands of the brewers at Yolo Brewing Company in West Sacramento. Our Brew Crew team consists of friends and family, all of whom have been touched by Alzheimer’s in one way or another. We will be promoting our event through social media, press releases and word of mouth.

Besides fund raising with email on “The Longest Day” site, we will have an awesome brew for Alzheimer’s supporters to take home – donations will be accepted – all going to the Longest Day & The Alzheimer’s Association.

The fun will be in the camaraderie, learning about brewing from Yolo Brewing Company, and yes, it is Father’s Day, so we will be celebrating with a few of our favorite Dads!

Keep an eye out, we will be posting our winning name, style, and label of our Alzheimer’s Awareness brew at the event!
Cheers!
Kelly