NEW REPORT: If we find an Alzheimer’s treatment by 2025 we can save $220 billion in five years! 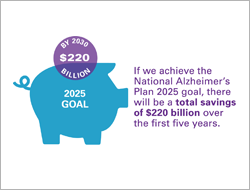 The U.S. could save $220 billion within the first five years of a treatment for Alzheimer’s disease being introduced, according to a new Alzheimer’s Association report Changing the Trajectory of Alzheimer’s Disease: How a Treatment by 2025 Saves Lives and Dollars (Trajectory Report).

The report takes an in-depth look at the potential lives saved and positive economic impact if a hypothetical treatment that effectively delays the onset of Alzheimer’s disease is discovered and made available to Americans by 2025.

The report shows that a treatment introduced in 2025 that delays the onset of Alzheimer’s would cut the number of people who have the disease by 42% – from a projected 13.5 million to 7.8 million in 2050.

The Alzheimer’s Association’s Trajectory Report also shows the positive impact of adequate Alzheimer’s research funding and the potential consequences of under-funding the disease:

In 2015, the costs to all payers for the care of people living with Alzheimer’s disease and other dementias will total an estimated $226 billion, with Medicare and Medicaid paying 68 percent of the costs. Without a treatment costs are projected to increase to more than $1.1 trillion in 2050.

Reaching the 2025 goal would save payers $220 billion over five years and $367 billion in the year 2050 alone. Savings to Medicare and Medicaid would account for nearly 60 percent of the savings.

People living with Alzheimer’s and other dementias and their families would save $54 billion over the first five years in their out-of-pocket costs if the 2025 goal is met.

The report reinforces the value of reaching the 2025 goal set by the National Plan to Address Alzheimer’s Disease mandate by the National Alzheimer’s Project Act (NAPA). If the federal government were to invest $2 billion per year as recommended by the scientific community, then it would recoup its investment within the first three years after a treatment became available.

The Alzheimer’s Association is working closely with the federal government to ensure the plan and goals outlined under NAPA are being executed and met.

A full text of the Alzheimer’s Association Changing the Trajectory of Alzheimer’s Disease: How a Treatment by 2025 Saves Lives and Dollars can be viewed at www.alz.org/trajectory. 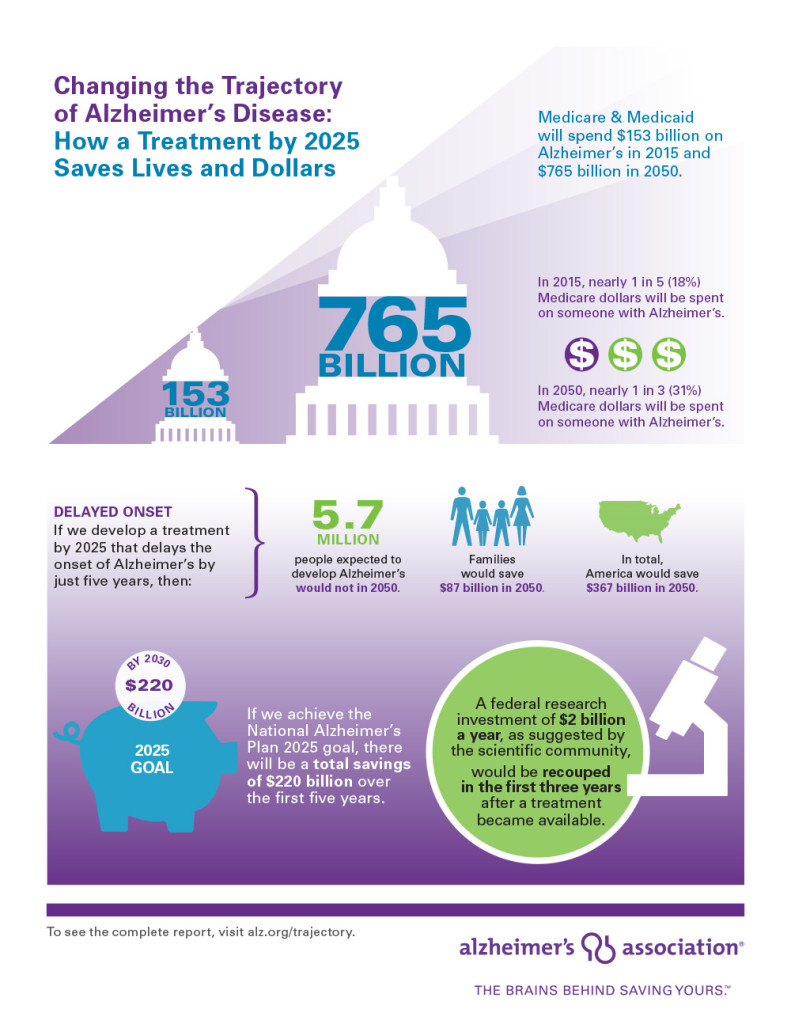