Research in the news: Alzheimer’s and Vitamin E 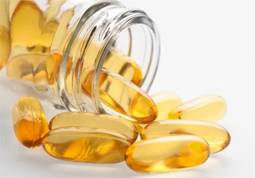 The Journal of the American Medical Association (JAMA) recently published an article describing the results of a clinical trial of vitamin E and memantine in people with mild to moderate Alzheimer’s disease. Here is a breakdown of the story!

Alpha tocopherol, a fat-soluble vitamin (known as vitamin E) and antioxidant, has previously been studied in patients with moderately severe Alzheimer’s disease and in people with mild cognitive impairment (MCI), but has not been studied in patients with mild to moderate Alzheimer’s. In a clinical trial of people with moderately severe Alzheimer’s, vitamin E was shown to be effective in slowing clinical progression.

In this clinical trial of people with mild to moderate Alzheimer’s disease, participants receiving vitamin E had slower functional decline than those receiving placebo, with the annual rate of decline in activities of daily living reduced by 19 percent. The study authors say that this treatment effect translates into a clinically meaningful delay in progression in the vitamin E group of 6.2 months.

Over the average follow-up time of 2.3 years, the researchers examined the effectiveness and safety of vitamin E, memantine and a combination of the two for treatment of functional decline in patients with mild to moderate Alzheimer’s who were taking an acetylcholinesterase inhibitor. The trial included 613 patients at 14 Veterans Affairs medical centers. Participants received either 2,000 IU/day of vitamin E (n=152), 20 mg/d of memantine (n=155), the combination (n=154), or placebo (n=152). Change in functional decline was the primary outcome measure, and was assessed via the Alzheimer’s Disease Cooperative Study/Activities of Daily Living (ADCS-ADL) Inventory.

Studies have shown high dose vitamin E may increase risk of death, particularly in those with cardiovascular disease and taking vitamin E may interact negatively with certain medications, such as blood thinners, cholesterol lowering treatments, and antidepressants. Study participants who received “vitamin E and memantine” did not show the benefit that the “vitamin E only” group did. This is difficult to interpret, but warrants caution regarding the overall results. We need clarity and consensus on the safety issues around high doses of vitamin E.

It’s also worth noting that while participants receiving vitamin E had slower functional decline (a problems with daily activities such as shopping, preparing meals, bathing, eating, planning, and traveling, etc.) than those receiving placebo, how this functional benefit may translate to an individual and his or her caregiver is not yet clear.

No benefits were seen on any of the cognitive measures in any of the treatment groups. Cognitive measures are tests that assess changes in thinking and memory. It is unclear why there were functional but not cognitive benefits of this intervention and this re-emphasizes the need for replication and confirmation of these results before considering this as a treatment strategy.

This is a well done study by a solid research group. The results of this clinical trial are positive enough to warrant more research to replicate and confirm the results, but current medical practice should not change based on this study. No one should take vitamin E for Alzheimer’s except under the supervision of a physician.