A tearful, early Thanksgiving with John 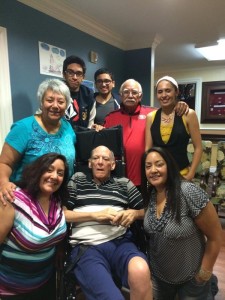 Our family at Thanksgiving

John is in hospice, but stable. He has lost about 40 pounds in the last 12 months which is the most troubling thing right now as he eats everything put in front of him, but he still loses weight. One of our daughters arrived last Saturday to visit. We decided to have Thanksgiving at his facility on Sunday. Both girls were there as were grandkids, my dad and a couple of friends. It was a good, but tearful time. More for our daughters, than for me. At least while we were there together.

Although unable to speak clearly or very often, he clearly knew people as his eyes got wide and a smile appeared on his face. He gripped Holly’s hand and wouldn’t let go. He hadn’t seen her in a year and she wept that he remembered her.

As I kissed him goodbye after dinner he looked at me and said “I love you.” It brought joy to my heart, but made Noel burst into tears. As I comforted her, I said that she had to hold onto the fact that no matter how horrible this disease is it has yet to take his ability to express his love for me. It isn’t as often as it once was, but enough for me now.

Once I was home alone I shed my tears. Time is short, every second precious.