Why I Walk: Victoria’s story 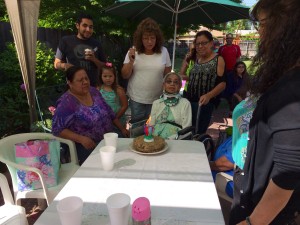 Our family on my grandmother’s 87th birthday

I Walk to End Alzheimer’s for my grandmother Maria Villarreal.

My grandmother is my family’s rock. She has six children and worked as a field laborer and a homemaker. Everything we did while I was growing up revolved around her: holidays, parties, family get-togethers, etc.

A few years ago, she started becoming forgetful when it came to her daily routine – stuff like taking her medication and other simple things. At first, we thought it was just normal aging. But it stood out when she asked my mother to come to her doctor appointments so my mother could remember for her. One time, she became very upset when she couldn’t remember a certain recipe and began to cry. She was diagnosed with Alzheimer’s on November of 2009.

When she was diagnosed, I didn’t know what it was or what it meant for my family. I think our initial reaction was shock. It was emotional for everyone and we were maybe even in a bit of denial in the first couple of years because she was still herself. We weren’t sure what to expect. We knew memory loss was happening but didn’t know how devastating this disease was. We joined an Alzheimer’s support group to better understand the disease process and were shocked at the facts. 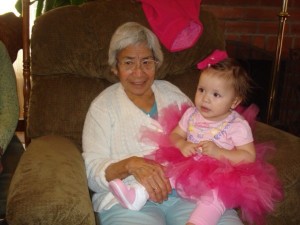 My grandmother with my daughter

I made the move back to my hometown a couple years after her diagnosis and I finally noticed how much she had changed. My mother became her caregiver and it started to take a toll on her and my family. The disease began to progress more rapidly. She wasn’t the same person I had grown up with. There were times, of course, when her witty personality would poke through, but those glimpses of the grandmother I knew were becoming few and far between.

In September of 2013 she gave us a terrible scare. She managed to get out of her home in the middle of the night, walk over two miles and fell, resulting in a neck fracture. That’s when my family knew more had to be done to ensure her safety. The thought of putting her in a home was very hard for my family, not just emotionally, but financially, too.

I had heard of Alzheimer’s before my grandmother was diagnosed but I didn’t know what it was, how it would change the woman I knew, and how it would affect my family. I have become very passionate about sharing information and spreading awareness about this disease. 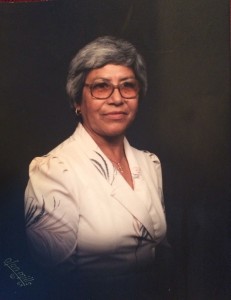 I started my Walk to End Alzheimer’s Team Maria in honor of my grandmother last year just a few weeks before the event. I was so amazed at the show of support from friends, family and complete strangers. My team was able to raise over $1600!

This year, we are raising funds again (our goal is $2,000!) and look forward to joining other families and the community to help end Alzheimer’s.

Helpful information related to this story:
Donate to Team Maria
Join Walk to End Alzheimer’s
Read more Why I Walk