The voices of our generation are crucial in this fight 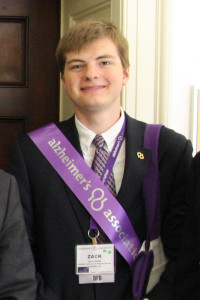 I would not be who I am today without my grandmother. Her diagnosis of younger-onset Alzheimer’s disease was the most devastating thing that ever happened to me, and is the reason for my continued involvement. She entered the late stages just as I was preparing to graduate high school. My grandmother was like a mother to me, and words cannot express how hopeless and hurt I felt watching her slowly lose her mind. Everything that could have gone wrong on my journey with Alzheimer’s disease did go wrong. Valuable family treasures were stolen from caregivers we trusted. Grandma’s own three children withdrew completely, and I blamed myself because I believed so much pain could have been prevented had I not maintained such a tremendous sense of denial toward Grandma’s condition. When I went away to college I felt I had to choose between my grandmother and my grades as more and more issues arose in my absence. My grandfather completely lost his health caring for the woman he loves. Eventually we had to place Grandma into a dementia care facility. It is hard for me to visit with her for more than thirty minutes to an hour; let alone walk into the locked dementia center. I find it rather painful to reminisce upon my childhood memories with Grandma because I know that seeing her now is nothing like the sense of joy one used to get being greeted by her former self. Family holidays are hard, especially when I set the table and remind myself that one extra place setting is no longer necessary.

Alzheimer’s disease did, however, inspire my future personal and career goals. I chose to study public policy, integrating the challenges of Alzheimer’s and dementia into my studies. Growing up, Grandma spent so much of her time taking care of me, and the tables turned making me the one fighting for her. Thus, her spirit will forever fuel my future career and the work I do with the Alzheimer’s Association. My Alzheimer’s journey caused me to examine the trajectory of Alzheimer’s disease at a national level. Today over 5 million Americans live with Alzheimer’s disease. It is the most expensive disease in America with 15 million people expected to be living with Alzheimer’s by 2050 at a cost of $1.2 trillion annually. Our job as advocates is to bring local, state and federal attention to these facts and figures and share our personal stories with elected officials. This is crucial for a disease with an unacceptable level of human suffering. As a young person, given the trajectory of the disease, I feel the voices of my generation are among those most crucial. After all, it is our generation who will bear the brunt of the financial and emotional toll of Alzheimer’s disease should the trajectory over the next several decades continue. My grandmother has given me my voice, just as those you love facing the disease have given you yours. I invite all, especially my fellow young Americans to join us in using those voices. Together we can, and we will, create a world without Alzheimer’s disease.