Carly is a high school senior who is committed to the Alzheimer’s cause because of her experience with her Grandpa. She raised over $2,000 for Walk to End Alzheimer’s in Sacramento last year and has such a compelling story, I had to share it with all of you. I hope you’re as inspired as I am by Carly!

I am a firm believer that people are just a compilation of their experiences. Who you interact with and the memories you have form your character as surely as a thrower molds clay. In accordance with this belief, my childhood is composed of memories that have made me who I am, whether they be good or bad. Some of these events in my life have left such a huge impact on me that I can recall even the smallest details of that moment.

One such time was December 26, 2007. Only the day after Christmas and my family was hosting a larger party of people than we ever do over the holidays. The reason behind this addition to just the usual suspects was because my grandfather, Alfred Dejesus, or most commonly known to me as Papa, was dying of dementia. I remember that day with better clarity than any given day in the last week. It is a day forever imprinted on my memory. 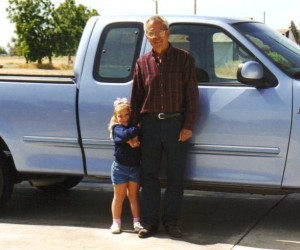 My Papa had been bedridden for days by that point, and unresponsive for the past two. He laid in my grandparent’s bed, my mom and Nana cleaning him and trying to keep him as comfortable as possible. They kept a constant vigil around his bed for the day. As for myself, I had secluded myself in the back room for the day, avoiding the constant stream of crying family and the reality of what was happening. I was just thirteen, and not prepared to lose a family member as important to me as him. Eventually I realized that I too should say my last goodbye. We each got a few moments alone with him, so I was able to talk with some privacy.

I remember walking into that room, I remember the way it smelled and how dim the lights were. Sitting next to him on the bed, I got to really look at a man that has influenced my entire life. Sleeping like this, one could not see the way the disease had changed his facial expressions or the way his eyes went blank when he lost his grip on the world. Here all I could see were the laugh lines battling against his deep working lines that could not be hidden by his aging wrinkles. He was the same man that he had always been to me, a hard worker, skin as dark as tanned leather from his years working in his walnut fields and from the Portuguese blood. His hair was still thick and dark, on the same head that I used to tie pigtails into and clip flowers onto.

About 12 years ago, when I was barely six, my grandfather was diagnosed with dementia. I was still new to the world, and I grew up only knowing the man that the disease had left me. Anyone who knew him told me that my Papa was one of the best men they had ever known. He was quick and sharp, with a dry wit and an easy laugh. He was a loving father, a generous person and a smart business man. As a child, none of this was shown more obviously than by the simple gesture of bringing my sisters and me donuts every Saturday morning without fail. And when he was no longer allowed to drive, he would have my Nana drive him to the local donut shop to bring his little girls a morning sweet.

He lasted seven years with his disease, and in that time I had matured enough to see for myself the changes that overcame his body and mind. He was still the same man that everyone knew him to be, but his mind had betrayed him. It was like I was seeing my Papa through a layer of fog, he could emerge every once in a while in a smile or a story, but then he always faded away again, still there, just an outline of what he really was. Later into my life, I have come to realize what a special person he was. He was patient and forgiving, he never got mad at me and tolerated my abuse for hours by willingly letting me ride around on his back, or playing “monkey in the middle” with my sister and me. I never heard him raise his voice to anyone; he was respected and loved by everyone.

As a child, my self-declared profession was to be a doctor, “but not a doctor that works directly with people, but a research doctor. Someone who finds cures.” This was my mantra whenever anyone asked what I wanted to be from before a time that I knew that there was such a thing as a “doctor in research.” To this day I am convinced that my place in this world is helping the masses by researching such debilitating diseases like Alzheimer’s. My Papa inspired this drive in me, because if I can, I want to prevent another little girl from losing her Papa before he can see her enter high school. The town that I live in is largely a retired population, where Alzheimer’s is a huge concern to the community. 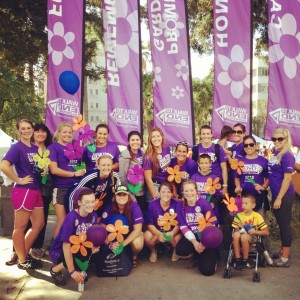 Carly and her team at Walk to End Alzheimers, Sacramento

In October of 2012, I had the opportunity to participate in the Alzheimer’s Association’s Walk to End Alzheimer’s. I created a team and raised over two thousand dollars to donate to the cause. For my Senior Project, I wrote a research paper explaining the necessity of respite care for the caretakers of Alzheimer’s patients. I am graduating high school this year, with a plan to enter the field of biology with the expectation that I will continue my education in the field of research in order to learn more about this disease that has impacted me so personally.

When I was in fifth grade, my family decided to make the move from our home in the Bay Area up to the city of Grass Valley, California. My parents and grandparents built a house on the property we had bought and moved my grandparents up in order to be with them for the remainder of his life. The last week of his life dozens of people came from states away to give their final respects to Papa, and he was surrounded by love and family when he passed. I remember one instance, years earlier when the family was out for dinner my Papa was approached by an old friend of his. My Papa was fully aware that there was something wrong with him, he knew that the disease was making him have deficits, but he tried to hide it the best he could. He knew that the man knew him, but Papa had a difficult time remembering the man and could not form his words well. Unaware of my Papa’s condition, the acquaintance jokingly asked my Papa, “What’s wrong with you? Are you stupid or something?”

My Papa was embarrassed of his inability to communicate better, but my father was livid; we thought we were going to have to hold him back. As a family unit, we were willing to do anything for Papa. Where many family members sometimes distance themselves from a sick or elderly loved one, my parents, sisters and I circled the wagons around him and cared for him through his best and worst. No matter how heartbreaking it is to watch a beloved parent and grandparent succumb to this disease, we never even considered leaving his side.

If I learned nothing from having a close family member affected by Alzheimer’s, it is that my family rallies together in a crisis and that family is more than just blood, it grew until it reached into every corner of our community, as everyone understood and supported us while we were managing our tough times. I remember that while my family has suffered from Alzheimer’s, it is a personal story for millions of people on this planet.

Looking at him that day, lying on his bed, I could remember just how much he had been in my life. He is an immense compilation of memories, he is the family that surrounded me in love, and for that he is part of me. Finally leaving the room, I bent over him and kissed his forehead. At the door I told him that I loved him, and I heard a muffled response of “I love you too, Baby.” He never spoke again. Just hours later he died, surrounded by the people that he loved and only after he was urged that it was time to “let go.”