What is the difference between Alzheimer’s and dementia? 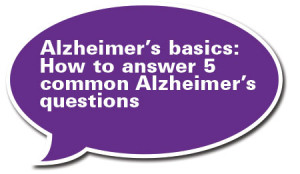 Dementia is not a specific disease. It’s a broad term that describes a wide range of symptoms, including memory loss or thinking problems that are severe enough to interfere with daily life. Many conditions can cause dementia symptoms, including some that are reversible, such as thyroid problems and vitamin deficiencies. Alzheimer’s disease is the most common form of dementia, accounting for 60 to 80 percent of dementia cases. Alzheimer’s is progressive, which means the symptoms will worsen over time. There is no cure for Alzheimer’s and it’s the sixth leading cause of death in the U.S.

If my Grandma has Alzheimer’s, does that mean I will get it?
Not necessarily. While it’s true that those who have an immediate family member with Alzheimer’s are more likely to develop the disease, there are many factors that contribute to whether or not someone gets the disease. Even people with high risk of Alzheimer’s may never get the disease and conversely, people who have low risk may get the disease.

What causes Alzheimer’s?
We are not yet sure of the exact cause of Alzheimer’s, but two abnormal structures called plaques and tangles are prime suspects in damaging and killing nerve cells in the brain. Plaques are deposits of a protein fragment called beta-amyloid that build up in the spaces between nerve cells. Tangles are twisted fibers of another protein called tau that build up inside cells.

How do people die from Alzheimer’s?
It’s a difficult topic to cover, but a very common question. In the latest stages of Alzheimer’s, people with the disease may lose the control over basic bodily functions, including the ability to walk, swallow, toilet, talk and breathe. Alzheimer’s causes people to become extremely susceptible to infections, such as pneumonia and malnutrition or dehydration is common. People with Alzheimer’s often die of these or other related complications.