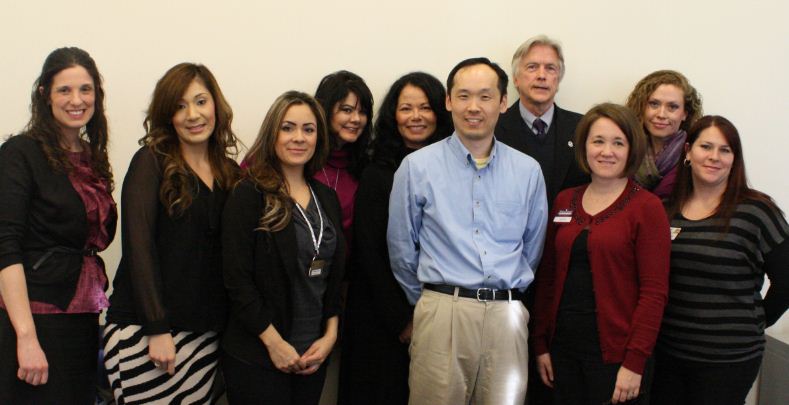 The Alzheimer’s Association had the pleasure of presenting a new investigator research check to Masashi Kitazawa, Ph.D. at the University of California, Merced. Alzheimer’s Association New Investigator grans fund the next generation of promising scientists who have earned their doctoral degrees within the last 10 years. We had a lot of support from our Walk to End Alzheimer’s volunteers in Fresno and Modesto, who made the drive to Merced to learn more about Dr. Kitazawa’s exciting area of research.

The grant will fund his study Neuroinflammation-Induced Alterations of GLT-1 and Synaptotoxicity in Alzheimer’s Disease. So what exactly does that mean?

First, some background: Astrocytes are “helper” cells in the brain that play a variety of roles. For example, they help support the function of neurons by providing energy to these cells. Recent studies have found that astrocytes may also prevent a toxic process called excitotoxicity in synapses””the tiny channels through which brain cells communicate with one another. Excitotoxicity occurs when synapses become overstimulated, and it can lead to brain cell dysfunction and death in Alzheimer’s disease. This toxic overstimulation may begin early in the disease process, and it may result from astrocytes becoming dysfunctional. Specifically, astrocytes may lose their ability to transport a neurotransmitter (or chemical messenger) called glutamate. This, in turn, may lead to abnormal glutamate concentration around synapses, which may cause synaptic loss and brain cell death.

What Dr. Kitasawa has found so far: In preliminary studies, Dr. Kitazawa and colleagues have found that Alzheimer’s mice age or their dementia progresses, they show reduced levels a protein called glutamate transporter-1 (GLT-1). Astrocytes need this protein to remove excess glutamate in the brain. The team also found that they could moderate GLT-1 losses by blocking the activities of another protein called interleukin-1. In a related experiment with cultured cells, the researchers observed that beta-amyloid””a protein fragment implicated in Alzheimer’s””could repress GLT-1 expression in neurons. These findings suggest that as brain beta-amyloid proliferates in early Alzheimer’s disease, it can help induce astroglial dysfunction and excitotoxicity.

For the funded study: Dr. Kitazawa’s team will use cultured neurons to identify mechanisms underlying the role of beta-amyloid and interleukin-1 in repressing GLT-1 activity. They will also examine how therapies designed to prevent the loss of GLT-1 may protect synapses and neurons in Alzheimer’s-like mice. Results of this effort could shed new light on the consequences of astrocyte dysfunction in Alzheimer’s disease.

View a slideshow of all the photos from the research check presentation: 2013 Research Check Presentation to Dr. Kitazawa