How do you get (and keep) a Senator’s attention?

A year ago, just before Christmas, my mother succumbed to Alzheimer’s disease. Her death ended a 15-year ordeal for herself and her family.  As I grieved for her in the months that followed, I struggled to make sense of what we’d been through.

Resolving to find a way to use what I’d learned from that pain, I reached out to the Alzheimer’s Association to explore how I might apply my experience in some small way to ending this dreadful disease and easing the path for others living with Alzheimer’s.

Last September, I accepted the offer to become the volunteer ambassador to Senator Dianne Feinstein with gratitude and great excitement. As such, I’m responsible for building relationships with Senator Feinstein and her staff to promote their understanding of and commitment to fighting Alzheimer’s.

As one of only two senators representing the largest state in the nation, Senator Feinstein is inundated with thousands of constituent requests seeking her support for other worthy causes, not to mention demands placed on her in addressing such critical issues as the fiscal cliff, gun control and international crises. So, the challenge for any Alzheimer’s ambassador is how to make an impact in the short time typically provided for meetings with legislators. In particular, how could I demonstrate to Senator Feinstein and her staff just how important making Alzheimer’s disease a national priority is to her California constituents?

Inspiration came from the Walk to End Alzheimer’s events that took place throughout the nation in September and October. During those walks, thousands of Californians signed postcards asking Senator Feinstein to ensure implementation of a strong National Alzheimer’s Plan, make Alzheimer’s research a priority and sponsor legislation to ensure diagnosis and care planning for people with Alzheimer’s.

Kimberly Weber, policy specialist with the Alzheimer’s Association, collected and bundled the cards – 5,000 in all – into a box so heavy that it took two of us to carry!

The week before Thanksgiving, Kimberly and I presented the box to Katie Gross, a staff member in Senator Feinstein’s San Francisco office. Inside the box were cards signed by Californians from Fresno, Stockton, Redding, Modesto, Merced, Aptos, Monterey, San Jose, San Francisco, Sonoma, Chico, Oakland and Walnut Creek. We also enclosed a letter asking the Senator to remember the needs of one of California’s most vulnerable populations: individuals with Alzheimer’s and the people who care for them. 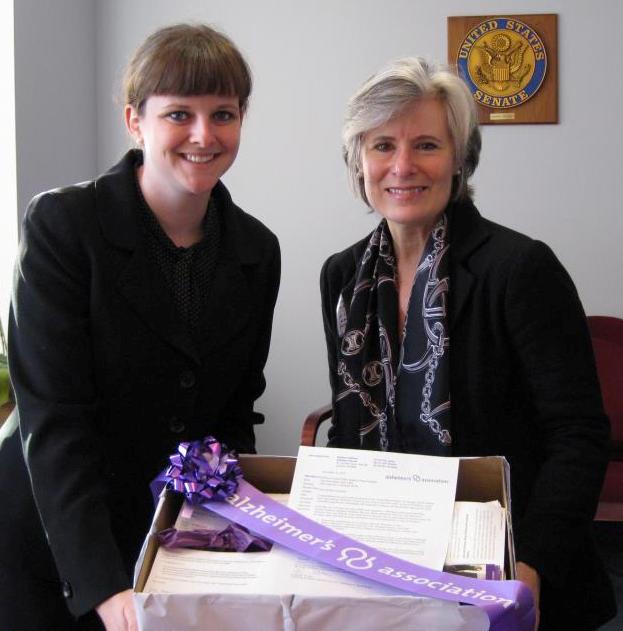 Ms. Gross graciously accepted the letter and the cards, a tangible (and heavy!) representation of how important Alzheimer’s is to so many Californians. She promised to deliver them to Senator Feinstein in Washington, DC.  We’re looking forward to continuing the Alzheimer’s conversation in the new legislative session that begins this month. There’s so much important work to be done in 2013 toward reaching our vision of a world without Alzheimer’s!

Learn about the National Alzheimer’s Plan

Learn about the HOPE for Alzheimer’s Act

Find your local member of Congress