National Caregivers Month: At 26, Laura is too young for “Yomamma Care” 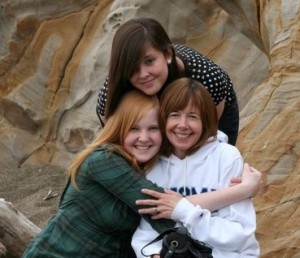 Laura, her mom and sister

Thank you everyone for so many words of encouragement for our family caregivers! We continue honoring caregivers during National Caregivers Month with Laura’s story. She and her younger sister are living the lives of young 20-somethings, while trying to give their dad a break from caring full time for their mom. Remember, you can post a tribute to the caregiver in your life at www.alz.org/nadam.

I officially found out about two years ago (November of 2010) that my mother had Alzheimer’s disease. She was 56. I was 24. Of course, by that point the changes were drastic enough that my suspicions were already quite high and, more than anything, I was relieved to have a solid explanation.

It was about 2-3 years prior, during my last year of college, that I had first started noticing that my mom seemed to be forgetting large chunks of our regular telephone conversations. She had always been deeply involved in my life, so the fact that she seemed to be disregarding the things I talked to her about was completely out of character for her. Being a worrier, my first horrified thought was that she was developing Alzheimer’s disease, but the friends I confided in were quick to assure me that she was too young and that there was a myriad different explanations for her minor memory lapses.

After completing my college years in Southern California and Scotland, I decided to move back to the SF Bay Area to start my “real life.” I lived for a year in San Francisco, which was about an hour drive from my parents’ house, but my mom’s memory was getting progressively worse during this time. By the end of my year lease, I knew I had to move back to Silicon Valley to be closer to my family. Whatever was happening to her, I was scared and even being an hour away was too far. My boyfriend and I found an apartment in Campbell, where we still live. When my sister, who is three years younger than me, completed her college career in Sonoma in 2011, she and her fiancÃ© moved down to Mountain View for the same reason. Neither of us has any plans of going anywhere right now; we could never do that to my dad.

My dad is the full-time caregiver for my mom after retiring immediately following her diagnosis. He, too, was only 56 at the time. Currently, two years after the diagnosis, I would say my mom absolutely cannot be left alone for any length of time. I have heard some stories about Alzheimer’s-afflicted people putting themselves in danger (i.e. leaving the stove on or wandering out of the house), but in her case it’s more a matter of her becoming extremely fearful over anything that is out of the ordinary. She is increasingly confused about her surroundings. To put things in perspective, she cannot get through a shower without a constant pep talk, hands-on guidance and a LOT of cursing.

What’s unique about being in my twenties and having a mother with Alzheimer’s disease? Lots of things. I don’t have any friends in my age group who sometimes get to towel-dry their naked, terrified mother after a routine morning shower or explain to her that no, the toilet is not broken, her body just doesn’t have to use the bathroom because she went 10 minutes ago. I don’t know anyone who talks regularly with their families about what will happen “when” their middle-aged parent dies – not “if,” because with Alzheimer’s there is no hope. With other diseases, one is allowed – if not encouraged – to hold on to the chance that their loved one just might pull through. But such is not the case with Alzheimer’s.

When my mom was diagnosed, my dad, sister, and I had a brief and passionate debate about who would be giving up their career to take care of her. My sister and I both attempted to assume the responsibility, and my dad listened to our arguments, but in the end he made the decision to retire early and take on the epic challenge himself. When he did this, he told us that he wanted us to be able to live our lives, and that my mom would have wanted this as well. She was always so selfless, always relying on us to call her once we left the nest so as not to “bother” us (as if a call from one’s best friend was ever any bother!) – I know my dad was and is right.

We both work full time, but we switch off weekends for “Momsitting” duty. Or, as my dad refers to it, “Yomama Care.” We make sure that someone is there for at least a few hours each weekend to give my dad some time off. I also have an ongoing agreement with my company that allows me to leave work early once a month to Momsit while my dad attends his Early Alzheimer’s Caregiver Support Group at the Alzheimer’s Association. There have been a few occasions that have called for my sister and I to spend the night with our mom while my dad has gone out of town. These nights especially have been exhausting and terrifying and horribly depressing, but worth every minute for my dad to have some freedom. Holidays and family gatherings are hard, really hard. My mom has a tough time with large groups and she gets moody and irritable. We still try to gather for all the big ones, but it usually puts a lot of stress on her and, in turn, my dad as well.

I do have a life outside of this disease and I am doing my best to be a regular 26-year-old – to enjoy my youth, the life I’m building with my boyfriend, and the future I still have ahead of me. My family has always had a fabulous sense of humor, and we are relying on it more heavily than ever to get us through this tragedy without losing our sanity. Not a day goes by, though, without me feeling deeply, terribly sad about losing my mom for at least a few minutes. Once in a while the thought that she will never be “normal” again smacks me across the face and I find myself in a state of disbelief. How is all of this really happening?! It’s too cruel and she is too good of a person. She doesn’t deserve this ending. Every time I physically see my mom, I go through at least a day or two of involuntary mourning because undoubtedly even more of what made her HER has died since I last spent time with her.

I Walk to End Alzheimer’s because it is so refreshing to be able to DO SOMETHING about ending a disease that has left me feeling so utterly helpless otherwise. To know that I could be making a difference, to know that maybe someday my children might not have to experience what I’m going through – it’s the most empowering thing I can do for myself right now. So how could I not walk?