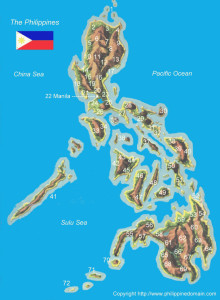 In celebration of World Alzheimer’s Month in September, we’re highlighting Alzheimer’s stories from around the world. We start in the Philippines with a story by Mona Sabalones Gonzalez, a writer, editor and blogger whose mother has Alzheimer’s disease. Mona wrote this poignant tribute to her mother, a stylish, smart, strong, loving woman. She gives helpful advice to readers about giving care to a loved one with Alzheimer’s – it’s a great reminder of how the Alzheimer’s experience is the same in so many ways all across the world. Read the original post on Mona’s hubspot: Alzheimer’s: When it hits home,  or read more by Mona at her blog: monasabalonesgonzalez.blogspot.com.

I grew up in a family of strong personalities – both parents and six siblings. But in the end, my mother, a housewife, proved to be strongest and most intelligent of us all.

When mama graduated from college she got the highest honors – and she was pinned by my Dad. She could have been a successful career woman. But my Dad was a diplomat, which is not viable for two-career parents.

Early on, when Dad was just starting out, my mom helped to boost family income by working in a bank. At one point she was up for promotion, where she would be tasked to oversee three branches of the bank. But my Dad, as a diplomat, knew her career would be unworkable.

My Dad rose through the ranks and did very well. Mama, naturally shy, took on the functions of a high ranking diplomat’s wife. This meant dressing right, going to diplomatic events, crowning beauty queens, organizing Filipino women in whatever country she was in, and meeting and hosting high ranking government officials. She rose to the occasion, although it was an unnatural role for her.

Motherhood was her favorite career. And when my parents separated, she was able to launch into her favorite job, motherhood, full time. My Dad continued to support our family, but she raised six strong-willed children single-handed and amidst fierce clashes, we always knew she was the captain of the ship.

We all led uncommon lives, and at a certain point my brave, resilient mom realized that neither brains nor financial security would hold her family together — but prayer could.

Prayer also helped her to bear her sadness silently. I rarely saw her cry. She woke up each day with resolve and kept an eye on all of us – our education, our friends, who we dated, what time we came home at night.

When Mama became forgetful, we first thought it was part of her quirky humor. Later, we became impatient and irritated. We never thought the tower of strength that she is could ever have Alzheimer’s. All six of us were in denial, saying it was this, or that, part of natural aging, senility, or that she liked to pretend.

Mama: What is your name?

Mama: Are you my daughter?

Here are some tips on what you can do if Alzheimer’s hits your home:

Your parent may forget your name and whether or not you are her daughter, but she can feel. If you make her happy, she will recognize the good feeling that is generated in your presence.

It was very tedious, but when ma and I went through these repetitive conversations, I would treat each question as if she had asked it for the first time. I didn’t ignore her, or make her feel neglected, bad or crazy. I treated her like a normal person who happens to be super repetitive. And at the end of our 3-hour visits, she was always happy.

That was the time when I was already married, and my house was three blocks away from mom’s. She lived with my brother, Victor, her only son whom she loved the most. Vic knew mom better than any of us, and just the sight of him could make her face glow.

One Christmas evening, Victor asked Ed (my husband) and I to drive mom around the village, as he felt she needed to be out of the house more frequently. It was the height of Christmas. All the neighbors had their Christmas lights on and holiday paraphernalia, nativity scenes, angels, the entire works.

Families were congregating and groups were singing Christmas carols everywhere. With every street we turned, there was music. As mom looked out the window she said over and over again, “I didn’t know I lived in such a pretty village.”

Ours is a small gated village with 800 homes and as we drove from one street to the next, she kept repeating over and over, “I didn’t know I lived in such a pretty village.” Then Ed drove beyond the village gates, but she became fearful and wanted to go back home, so we did.

As we reentered the village and drove her all the way back to her home, she again repeated over and over, “I didn’t know I lived in such a pretty village.”

It was a very happy Christmas, indeed.

Learn more about how you can become involved in World Alzheimer’s Month at www.alz.org/wam.