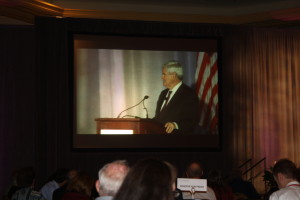 Newt Gingrich speaks at the Forum this morning

Good morning from day two of the Alzheimer’s Association Advocacy Forum. In this morning’s general session, we heard from former Speaker of the House Newt Gingrich. Newt co-chaired the Alzheimer’s Study Group with Senator Bob Kerry. The commission was responsible for making recommendations on how the country should move forward regarding Alzheimer’s – ideas that we are putting into motion today such as NAPA, the Breakthrough Act and the HOPE Act. He made a strong case for greater investment in Alzheimer’s research and care on the Federal level, reminding us of the enormous scale of the disease in terms of the human and financial costs. “Between now and 2050 Alzheimer’s will cost $20 trillion; in context Alzheimer’s will cost 1.5 times the current national debt. This one condition will cost the U.S. 50 percent more than the entire debt in the U.S.”

He also had some intriguing ideas about the future national strategy on Alzheimer’s disease, telling the room that if you can spend a dollar now to save 100 dollars tomorrow, you shouldn’t count the dollar as a cost, you should count it as an investment.

He used Polio as an example of success – in 1950 60,000 Americans got polio and the disease projections were abysmal, imagining a world full of iron lungs.  However in 1952, Jonas Salk discovered the first effective vaccination for polio. By 1953 he was vaccinating small groups of people. Today, we are one the edge of eradicating polio worldwide. This is a great success, but he cautioned “Today that process would take 20 years.”

He pointed out that there are more scientists alive today than any time in history – and that they are connected today by the best computers and communication technology in the world. He says that in this environment, that means between 2011 and 2036 we’ll go the same distance in the world of research as we did from 1880 to 2011. He predicts that over the next 25 years, we will see 10 to 30 times more brain science. He asks the question, “If you have a $20 trillion expense looking you in the face, what’s a reasonable investment? I want to know not what can we afford, I want to know how much is needed to reach a breakthrough.”

He presented a big idea: take brain science off budget. Fund brain science through Alzheimer’s bonds at the optimal level according to what scientists think effective. The bonds will essentially be paid back by the savings created when the research breakthroughs start to slow the tide of Alzheimer’s, and he noted, many other conditions would benefit.

He also laid out four additional areas he believes are key to moving our cause forward:

1.) Challenge National Institutes of Health to make a large investment in Alzheimer’s disease and make them treat it on the same scale of something like the human genome project.

2.) Rethink the way the Food and Drug Administration works to make it a 21st century system that can accelerate innovations from the lab to the public asap.

3.) Rethink how the Medicare process works so we can implement changes quickly.

4.) Pilot model projects in caregiving that use technology to help caregivers that can be mass produced and made available to everyone who needs help.

And lastly, a strong message – “I want to reassure you that you as a citizen have every right and indeed every responsibility to go out to see your elected officials and tell them what’s going on. The constitution begins with ‘we the people’ not ‘we the politicians’ and you represent the living personification of ‘we the people.’”